Top ranking officials of the bourse warned members of strict action — including ouster and restricted trade relations — if they traded in these diamonds.

By
Shailesh Menon
, ET Bureau|
Mar 17, 2016, 05.44 AM IST
0Comments
In September last year, Bharat Diamond Bourse (BDB), billed as the world’s largest diamond bourse, decided to act against traders and manufacturers who dealt in lab-grown diamonds. Top ranking officials of the bourse warned members of strict action — including ouster and restricted trade relations — if they traded in these diamonds.

This was BDB’s first formal attack on diamond merchants who trade in lab-grown diamonds (also known as synthetic, cultured, home-made, man-made or lab diamonds). At the heart of the contention is the practice of deceitful traders “mixing” cheaper lab grown diamonds with mined natural diamonds and selling these at latter’s price. A few weeks later, over a dozen traders moved out of BDB — home to some 2,500 small and large diamond traders — to swankier offices in Central Mumbai’s Bandra-Kurla Complex. A protracted battle between two sections of diamond trading had begun. 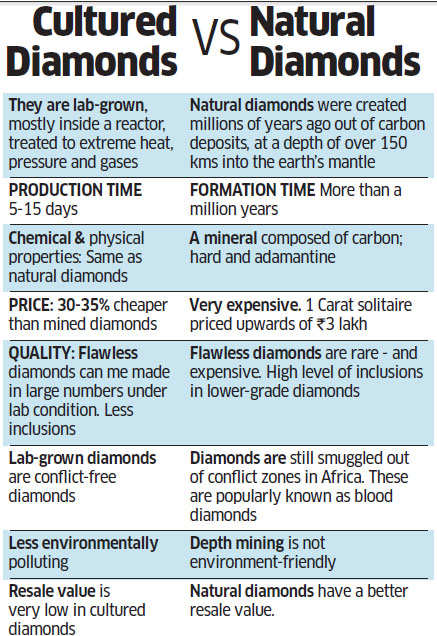 BDB has sided with natural diamond manufacturers, the purists for whom a diamond can be classified as such only if spent millions of years inside the earth, usually in riverbeds, and are then mined. Lab-grown diamonds are nothing short of sacrilege for them because, according to them, they have no pedigree. Pedigree or not, lab-grown diamonds turn the narrative of natural diamonds on its head. They gnaw at the carefully created notion that diamonds are rare and valuable, and synonymous with esteem and luxury.

How so? As the name suggests, lab diamonds are created in laboratories — like any other factory product — with one stone turning up every 200 hours or a little over three days. They are also sold 30–40% cheaper than mined diamonds in developed markets. 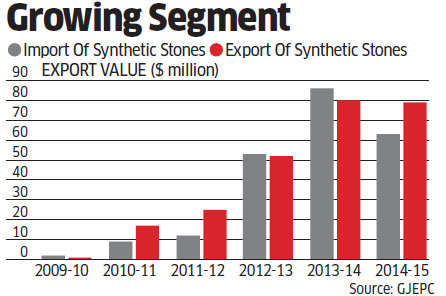 “We’re not worried,” says Praveen Shankar Pandya, chairman of Gem & Jewellery Export Promotion Council (GJEPC or the Council), the apex body of gems and jewellery industry. “Our problem with them is only when they sell home-made diamonds as real diamonds... our problem is when they mix synthetics with natural diamonds and cheat people. As long as lab-grown diamonds maintain a separate footprint, we’re fine with their existence,” affirms Pandya.

Even so, Pandya admits that if left unchecked, lab-made diamonds would threaten the mined diamond industry. “We export 95% of our diamonds; if buyers get lab-grown diamonds in their ordered ‘natural pack,’ our credibility would go down the drain. We cannot let that happen.”

The Perfect Pebble Two years ago, the Council had set up a committee – National Diamond Monitoring Committee or the NDMC – to check the proliferation of lab-diamonds in the country. 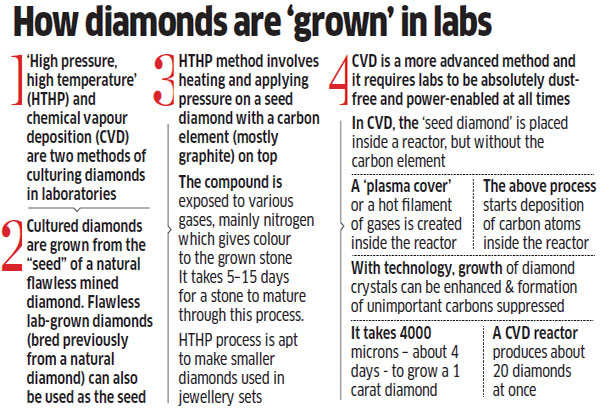 NDMC then commissioned Bonas Group and AT Kearney to prepare a report on the prevalence of lab-made diamonds in India. The report estimated an annual production of gem-quality CVD and HTHP synthetic diamonds at 350,000 carats (the measure of mass or size of diamonds), with prospects to grow to 1.5 million carats in three-five years.

‘High pressure, high temperature’ (HTHP) and chemical vapour deposition (CVD) are two methods of culturing diamonds in a laboratory. While no agency keeps data on lab-made diamonds, the periodic export-import data of synthetic stones (collated by the Council) serves as a good reference point.

These numbers pale in comparison with the export value of mined polished diamonds.

Kothari, like Pandya, frowns on the unethical practice of selling (relatively) cheaper man-made diamonds as natural diamonds to gullible buyers. An average ‘minedand-polished’ solitaire is sold in the market at Rs 3-3.5 lakh; a comparable lab solitaire would cost around Rs 2.5 lakh.

Unscrupulous traders mix lab diamonds with natural ones and sell at the price of natural diamonds, according to Kothari. “We’re not worried about large-sized labgrown diamonds, as these can be identified and sorted out easily. The problem lies in small HTHP diamonds (used in jewellery sets) coming from China in rough form. They are difficult to detect.”

Though the size of the lab diamond market is relatively small now, it is not only growing at a furious pace but is also attracting a steady stream of admirers. “A lot of established diamond traders are now showing interest in lab-grown diamonds,” says Avik Ashar, business head at Hiraco Diamonds, which has started producing small lab diamonds in its overseas laboratories.

Hiraco specialised in ‘natts diamonds’ (natural diamonds with black spots) for 40 years before switching to lab diamonds. “Lab-grown diamonds will become more popular in the years to come. We’re already getting enquiries from both Indian and overseas retailers,” Ashar says.

Lab-grown diamond manufacturers like Hiraco, 2A Technologies and New Diamond Era are keen that guidelines should be framed and industry best-practices should be introduced to end unethical practices.

According to industry insiders, several traders in Surat, the global hub of diamond cutting and polishing industry, are engaged in polishing rough cultured HTHP diamonds sourced from China. This is a disturbing trend for purists because almost 90% of the mined rough diamonds across the world are sent to Surat for cutting and polishing.

The Glittering Clone Lab-grown diamonds are ‘grown’ in controlled laboratory environment using technological processes that duplicate the conditions under the earth’s crust. Once grown, cut and polished, these stones are identical to natural diamonds and bear the same molecular properties.

“Both mined and grown diamonds are made of pure carbon and have identical physical, chemical and optical attributes,” explains Vishal Mehta, CEO at Singaporebased 2A Technologies, a large lab-grown diamond manufacturer.


“Grown diamonds have gained popularity because they are conflict free, eco-friendly and less expensive. You can also go higher in quality or size; we’ll be able to produce the purest diamonds in the world, which is just 2% of world’s total production from mines,” says Mehta.

When companies started culturing diamonds in laboratories, they were not able to produce the same quality as natural diamonds. While they managed mark up clarity levels, they could not get the colour right. After years of trials — and billions of dollars worth of investment in technology — laboratories have now managed to grow near flawless diamonds. “These days we get near-flawless pieces with superb clarity,” says Bhautik Savalia of Bhojal Corporation, a Surat-based trader of lab diamonds.

A CVD lab with two reactors costs nearly Rs 10 crore. Different models of reactors – imported from USA, Germany and Japan – cost between Rs 80 lakh and Rs 6 crore. That’s not all. The labs need scientists. Candidates must have a masters’ degree or a PhD in material physics. There are just about 500 such experienced scientists in the world. “Money alone will not get you the desired results. You’ve to bring together a lot of complicated elements to make the lab functional and get good yield,” says Malay Hirani of Soni CVD Diamonds, which supply reactors and other allied technologies to labdiamond manufacturers.

“Every reactor produces 120–125 carats of rough diamond every session. Postpolishing yield could be around 25–30 carats. You’ll need at least 10–12 reactors to make the business viable,” adds Hirani.

The Way Ahead These problems haven’t been a deterrent. According to industry sources, nearly 50 culture diamond manufacturers have started lab trials in India over the past two years. Between April and November 2015 alone, domestic manufacturers have imported 31 CVD reactors worth Rs 33.80 crore. “It takes 3–4 years to perfect the diamond and commercialise it. Also, cost of production is relatively high in CVD. We manage a profit margin of 20% with yields from 48 reactors,” says Bakul Patel of New Diamond Era, which exports all its diamonds to retailers in Hong Kong and Dubai.

According to Jignesh Mehta, managing director of Divine Solitaires, natural diamonds will always reap the benefit of “prestige pricing” as it is limited in supply. “Lab-diamonds, on the other side, will have very low resale value as these are not rare like mined diamonds. There’s no secondary market for lab diamonds, so it cannot be seen as an investible asset class,” explains Mehta.

Even natural diamonds, according to conservative money managers, cannot be considered an investment as it lacks a formal liquid market. People who buy the rock do so to preserve it for a lifetime and then pass it on to the next generation.

Moreover, in markets like India, diamond is only repurchased by the jeweller who sold it you previously. Absence of fixed quality standards and price benchmarks may even force the consumer to sell his diamond at a discount.

India is the third largest market for polished diamonds, but its share of overall sales is only 8% compared with 42% for USA and 16% for China. Still, absolute sales figures of diamonds have improved significantly over the past 10 years with Indian market trebling in size to about Rs 22,000 crore by end-2014. About 25 lakh pieces of diamond jewellery were acquired by Indians in 2013, according to reports quoting a market survey released by De Beers in 2015.

“In course of time, small diamonds in both categories would be treated at par. These may blend on a pricey jewellery sets. Only large, single diamonds would be classified as natural or man-made then,” he predicts.
Read more on
Diamond
environment
USA
Indian market
De Beers