The transaction may also see Vasan’s founder promoter selling out or paring his stake significantly, leading to a potential change of management control, said multiple people with knowledge of the matter.

A Mumbai-based domestic investment bank has already been roped in to facilitate the transaction, which could see valuations cross over $1 billion on the back of a huge demand-supply gap in a country where 80% of blindness is avoidable, as per World Health Organization data. In 2012, a WHO report stated that India has an estimated 12 million blind people and additional 456 million people who require vision correction. 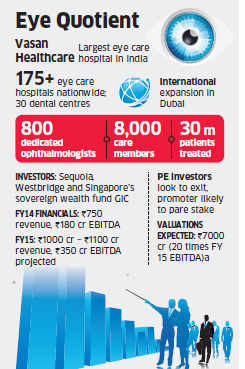 In the recent past, the company had explored several fund-raising options such as an IPO and as recently as late last year, Vasan’s investors were in informal discussions with a few global players such as Parkway Holdings, Southeast Asia’s largest healthcare provider, its Malaysian parent Integrated Healthcare Holdings and a South African chain for a potential transaction, though nothing came of these. Now for the first time, a formal process is expected to start within the next few weeks.

Since 2009, venture capital and private equity funds such as Sequoia and Westbridge and the Singapore government’s sovereign wealth fund GIC have in all pumped $120 million into the company through a mix of equity, compulsorily convertible preference shares and debentures. Among the three, GIC alone invested $100 million in 2012 in what was one of the largest PE transactions in domestic healthcare.

Although the exact shareholding is still not clear, once converted on a fully diluted basis, the funds could own 45-51% in the company, with GIC having a lion’s share, said sources in the know. Healthcare entrepreneur AM Arun, who launched the first Vasan eye clinic unit in Trichy in 2002 and is currently chairman and managing director, owns the rest.

Karti Chidambaram, son of former finance minister P Chidambaram, used to own a 5% stake in Vasan through one of his investment entities. According to one of the investors in the company, he has ceased to hold a stake and resigned from the board in 2013.

Vasan’s Arun, GIC's India spokesperson and VT Bharadwaj, MD of Sequoia Capital and a board member of Vasan, did not respond to email queries from ET till the time of going to press. Calls to Arun’s mobile were also unanswered. KP Balaraj, co-founder and MD, WestBridge Advisors Pvt. Ltd, and also a board member in Vasan, declined to comment.

Chennai headquartered Vasan Healthcare, with roots in the pharmacy business since 1947, currently has more than 175 speciality eye care and 30 dental centres nationwide. However, the southern states still remain the most important market. It has also expanded its geographical footprint to Dubai and claims to be the largest such eye care chain around the world.

"Within the single speciality healthcare segment, high quality scaled assets tend to trade around the mid teen range on a one-year forward ebitda basis. We have yet to see sustained interest from overseas strategic players in this segment and hence the audience for such large deals will remain limited for the time being," said Shiraz Bugwadia, MD with investment bank o3 Capital, and a pharma and healthcare specialist.

Some however are not fully convinced. "The company is the largest player in its space without a doubt. But many would question its growth or numbers. Sometimes they don’t add up," said a Bangalore based consultant.

The eye-care segment has seen the emergence of not-for-profit companies such as Aravind Eye Care and Sankara Nethralaya, which provide services at very little cost or free. These two companies have gained both size and critical mass along with a clutch of private companies such as Vasan, New Delhi Centre for Sight and Eye-Q, all of which are PE backed.

PE players have especially been lapping up investment opportunities in the local specialty healthcare delivery segments such as eye, dental and women and children with several small-sized transactions.

These asset-light business models, though still at a nascent stage in their evolution, offer investors an alternative to asset-heavy hospitals that tend to guzzle cash. The ebitda margins of such specialty chains like eye care tend to be at least 5-10% higher than other single-specialty and multispecialty players, feel some analysts.
Read more on
Vasan Healthcare Pvt Ltd
IPO
product
venture capital
World Health Organization
premium
net worth
preference shares
Poverty Trap
Insurability