Lafarge India — which plans to shed a minority stake to raise Rs 1,325 crore and fund it expansion plans — is looking to complete the stake sale process by March this year. 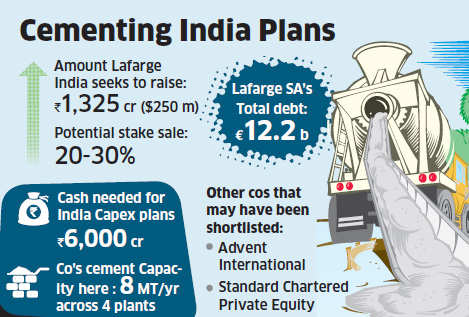 MUMBAI: Temasek Holdings, Singapore’s sovereign investment fund, and one of Asia’s oldest marquee private equity investor Baring Asia are among those shortlisted by French cement multinational Lafarge as potential buyers for a minority stake in its Indian arm Lafarge India.

Lafarge India — which plans to shed a minority stake of 20-30% to raise Rs 1,325 crore ($250 million) and fund its Rs 6,000-crore expansion plans — is looking to complete the stake sale process by March this year. Saddled with a highly-leveraged consolidated balance sheet at the parent level, Lafarge has decided not to raise more debt locally to fund capital expenditure. Instead it is looking at equity financing from financial sponsors.

Since last year, the Paris-headquartered Lafarge, the world’s largest building-materials company, has also been restructuring its global operations through a series of asset sales to pare down its debt to 10 billion euro from 12.2 billion euro after a 2007 purchase of Orascom led to the loss of its investment-grade credit rating last year.

Temasek and Barings Asia are among the select bulge-bracket names that have made the first cut, said two informed sources. Advent International — a US buyout and growth-capital focussed fund — is believed to be in the race along with Standard Chartered Private Equity. “Clarity will emerge by this month end once the final offers are on the table. By then, we will get an idea of the valuations offered and accordingly the potential stake that will get diluted,” said an official involved in the ongoing negotiation, on the condition of anonymity as the talks are still private. Lafarge expects to buy back the stake from the potential PE players in 3-5 years, once it is relieved of its current financial stress. It is also contemplating an India IPO which could also provide an exit route for the funds.

Other PE funds such as KKR, Carlyle, Blackstone and Bain who held preliminary talks with the management of Lafarge, have withdrawn due to expensive valuations and other structural issues. “It’s too expensive,” said a senior PE industry official. “It’s not a classical PE investment.

Lafarge is being forced to do this due to its global financial health. But they know the value of their India piece which is why they do not want to keep their shareholdings diluted for long. So this will be a structured deal and much will depend on what finally gets negotiated. While exercising its call option, Lafarge may offer a guaranteed return or a fair market value which ever is higher. Typically, PEs do not want any restrictions on the upside. So the final formula will be critical,” added another official.

Lafarge India, which has the capacity to produce about 8 million tonnes annually, is looking to get a valuation of $150 per tonne. “As mid-cap stocks of similar capacities are trading below $100 per tonne, a minority stake in Lafarge may not happen at such high valuations.”

Baring Asia, other PEs in talks to buy stake in SRL Diagnostics