The hotel is one of the most iconic in the capital city. Indian Hotel’s lease for the property ended in October 2011, but it has got several extensions since then.

An auction could see fierce bidding from the likes of hotel development and investment firm SAMHI Hotels, Lemon Tree Hotels, and many other foreign institutional investors, hotel companies as well as private equity funds.

“At a broad level, yes, we would be interested in bidding for the property,” said SAMHI Chief Executive Ashish Jakhanwala. But a number of issues needed to be clarified before that, like the tenure of the lease and whether it is fixed or variable, he said.

“We are always keen for good quality assets but we are not into the trophy asset business. So, if it's a 30-year lease, unlikely. If it's longer, we will be interested.” Patu Keswani, chairman of Lemon Tree Hotels, said if it is an open auction and there is no right of first refusal, then like most others international and domestic hotel companies, the company too would like to bid.

Dilip Puri, Starwood’s managing director for India, said while Starwood will not bid as it does not invest in real estate, if investors bid for it and got it, the company will like to manage the property. 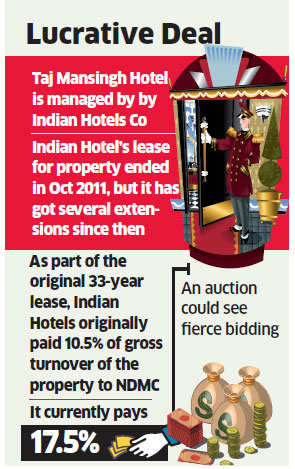 The hotel is one of the most iconic in the capital city. Indian Hotel’s lease for the property ended in October 2011, but it has got several extensions since then.

As part of the original 33-year lease, Indian Hotels originally paid 10.5 per cent of the gross turnover of the property to NDMC. It currently pays 17.5 per cent , but this number could go up significantly if the property is auctioned.

In the past, the likes of Accor Hotels, Oberoi Group, ITC and the Sahara Group had expressed interest in bidding for the property. PRS Oberoi, the chairman of EIH Ltd which owns the Oberoi Group of hotels, had told ET in 2012 that he would be interested if the price was in range.

“Quite simply, it’s a good location and there are not many hotels in Delhi. It makes good business sense,” he had said.