By
Radhika P Nair
,
Madhav Chanchani
, ET Bureau|
Sep 05, 2014, 06.50 AM IST
0Comments
BANGALORE: Online fashion retailer Jabong is opening up a new front in the Indian ecommerce battleground. Its major investors, Germany’s Rocket Internet and Swedish investment firm Kinnevik, are merging five of their international fashion ecommerce firms, including Jabong, into a single global entity. This will allow the Delhi-based company to tap into a global knowledge base and also give it access to new and large investors. The combined conglomerate has been named Global Fashion Group (GFG).

"We are delighted to have joined forces and have created a global fashion giant which is active in four continents. This will lead to an even better experience for us internally but also for our customers. We can rely on common sourcing, outstanding IT competencies and our experiences with private labels," said Praveen Sinha, managing director of Jabong. He, however, declined to provide details of the implications.

"There's a lot that ecommerce players can learn from firms in other geographies that are ahead on the evolution curve - from customer experience to supply chain," said Neelesh Hundekari, partner at consulting firm AT Kearney. The company can also leverage the global network it has to get exclusive merchandise. "Apart from money, Jabong will also be able to bring in brands of the other companies to India and will also have a global market for its brands," said Arvind Singhal, chairman of retail advisory Technopak.

Kinnevik and Rocket Internet's statement stressed on the online brands that the five entities, all launched in 2011-12, have developed. Jabong, for instance, has launched private labels Lara Karen and Sangria while Southeast Asian site Zalora has launched a namesake in-house brand and another called Ezra.

But the primary and long-term advantage will be in the form of access to capital. "From a capital-raising perspective, it's a good strategy and puts them in the game to compete with Amazon, Flipkart and Alibaba, not just in India but also globally. The main ingredient going forward now will be cash," said Rehan Yar Khan, founder of Orios Venture Partners, which has backed niche apparel portals such as lingerie site Prettysecrets and international market-focused Indian designer wear site Exclusively.in.

Fashion has emerged as one of the most fiercely contested categories in the Indian commerce space. An Accel Partners report said it will see 400% growth in the next three years from $559 million to $2.81 billion by 2016. 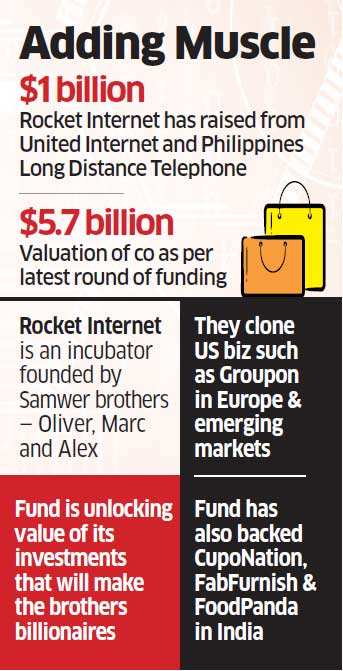 After Flipkart's acquisition of fashion ecommerce leader Myntra in May, the combined entity is estimated to have a market share of more than 50% in the online fashion segment. With the $1-billion fund-raising by Flipkart in July, capital is not an immediate concern for the combined entity. Jabong, which is in the second spot, has a market share of about 25%, according to industry estimates.

However, with other large and well-funded players such as Amazon and Snapdeal focusing heavily on fashion, Jabong may soon feel the heat. Fashion has become an important segment for the online mega stores since it provides better margins of about 35%, compared with the less than 5% in the electronics segment. Snapdeal has stated that it expects $1 billion in sales just from fashion next fiscal.

For Rocket Internet, this is another step toward its proposed public offer in Frankfurt, as it now has a single entity that is valued at Rs 21,500 crore (2.7 billion euros), based on the combined valuation of the five entities at the time of their last fund-raising.

Its strength in India will only help Rocket's IPO plans. "There is no doubt that India will become a big ecommerce market in the not-so-distant future. A strong presence in India will add to Rocket's overall valuation," said Technopak's Singhal.
Read more on
IPO
brands
market share
Wholesale price index
categories
net worth
Insurability
Frankfurt
Amazon
Accel Partners

Online fashion users expected to grow to 200 million in the next five years: Amar Nagaram, Myntra-Jabong