Wholesalers grab discounts offered on Amazon, Flipkart and sell at a profit

India’s ecommerce is seeing new customers who scour the Net for best deals and then resell the goods either offline or on other online platforms at a higher price.

By
Jochelle Mendonca
,
Madhav Chanchani
, ET Bureau|
Sep 04, 2014, 06.39 AM IST
0Comments
MUMBAI: India’s ecommerce is seeing a new group of customers who are not exactly welcome — they scour the Net for the best deals and then resell the goods either offline or on other online platforms at a higher price. The deep discounts on offer at ecommerce portals such as Amazon India and Flipkart are creating an arbitrage opportunity for such players, especially wholesalers.

A recent study for an unnamed ecommerce client by consulting firm EY showed that 10% of the total client base was undetectable and is considered to comprise wholesalers. “EY did customer segmentation for a player in the market and discovered that part of customer segment consisted of wholesalers and traders,” said Milan Sheth, a partner at EY. Sheth declined to disclose the client’s name.

“The study also revealed the practice of buying from one ecommerce player and acting as a stockist for another,” said Sheth of EY. The trend is primarily prevalent in the electronics category, the biggest money-spinner for ecommerce firms. For instance, a Canon IXUS 155 camera is available on Snapdeal for Rs 6,486, Amazon India for Rs 6,699 and on Flipkart for Rs 7,996.

“There will always be abuses when you operate a marketplace. When we see that, we let those customers know that this is not acceptable,” said Samir Kumar, director of category management at Amazon India. India’s ecommerce market is seeing intense competition among players such as Flipkart, Snapdeal and Amazon, given the fast growth. 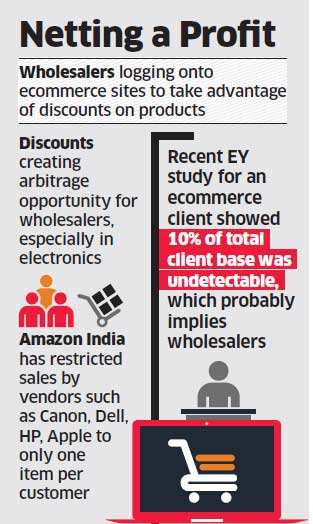 In the next five years, online product retail, or e-tailing, is estimated to grow from Rs 12,000 crore in 2013 to Rs 1.39 lakh crore by 2018, says a Nomura report. Amazon India has restricted sales on Canon, Dell, HP and Apple products, among others, to only one item per customer. It mentions this on the page with product description, and also does not allow customers to check out multiple items of the same product.

“Some of the restrictions are done automatically while some in a manual way,” said Kumar. Amazon also has a team to track this issue and also has technology developed from its experience in other markets. “In the back-end we have global learnings that we have brought in from instances like demand for top-selling toys in US during Christmas,” said Kumar.
Read more on
markets
product
Wholesale price index
net worth
Arbitrage
Insurability
segmentation
Amazon
Dell
Milan Sheth

Amazon to source directly from farmers