Reliance has started talks with half a dozen BPO companies to outsource call centre and other support work for its Jio telecom operations.

By
Jochelle Mendonca
,
Devina Sengupta
, ET Bureau|
Last Updated: Jun 08, 2016, 06.48 PM IST|Original: Dec 31, 2015, 04.00 AM IST
0Comments
MUMBAI: Reliance has started talks with half a dozen BPO companies to outsource call centre and other support work for its Jio telecom operations in what could potentially become one of the most lucrative contracts for the IT-enabled services industry. The service is expected to be commercially launched in the first half of next year. The deal is expected to include customer voice support, know-your-customer and activation services, two people with direct knowledge of the plans said. “The process to outsource this has already begun. The deal will be split between three or four providers and should be concluded in January,” a person with knowledge of the outsourcing contract said.

Reliance has shortlisted five companies — Serco, Concentrix, Wipro, Aegis and WNS — for the deal, a second person with knowledge of the discussions said, adding that French business process outsourcing company Teleperformance could also be in the reckoning. 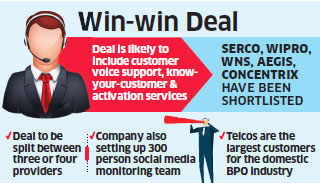 “Jio is a building a robust infrastructure that will deliver an unmatched customer experience and create new benchmarks in the industry. To achieve this, Jio works with several partners across various functions.

As a policy, Jio does not share information about its partners and associates,” a Reliance Jio spokesperson told ET in response to an emailed questionnaire. Serco, Concentrix, Wipro, Aegis and WNS had not responded to a request seeking comment at the time of going to press.

Though ET could not establish the exact size of the deal, sources said it would initially be in the ‘hundred crore range’. “It is hard to pinpoint deal value because Jio isn’t fully operational yet. Deal sizes will depend on the number of full-time equivalents needed and that will depend on how much the company grows.

But similar deals with telecom companies can go to over a thousand crores over five to seven years,” a third source with knowledge of the outsourcing contract said. A full-time equivalent is effectively the number of people required to fulfill a contract. Telecom outsourcing has been a cornerstone of the BPO industry and deals are split across several outsourcing providers.

Typically, call centre support is divided up based on the circles in which the telco operates. Banks are also the largest users of outsourcing — State Bank of India and its associate banks are the large single group of outsourcing customers spending over Rs 3,000 crore a year on technology and BPO. Reliance is also looking to create a team of 300 people to track social media mentions for Jio, a person with knowledge of the plan said. This could be created in-house and outsourced later, the person explained. “We do not comment on speculation nor do we share details about our operational strategy related to various functions within the organisation.

The consumer expectations have evolved over time and consumers are now looking at brands to offer them a seamless experience that spans showroom floor to the digital arena. A multi-channel interface, is therefore, critical for brands to ensure an effective engagement with consumers,” the company spokesperson said.

The customer support rollout comes more than five years after Reliance Industries bought a company which had won pan-India 4G airwaves in India’s first ever spectrum auctions in 2010.
Read more on
Reliance Industries
4G
Comments
Add Your Comments
Commenting feature is disabled in your country/region.