The 4G launches have led to a battle of billionaires — with a combination of Mukesh and Anil Ambani taking on the likes of Sunil Mittal and Kumar Birla.

"From a lull period following the cancellation of telecom licenses in 2012, hiring has shot up and this is the highest we have seen since new licences were issued in 2008," said Arpita Pal Agrawal, leader-telecom at PwC India.

"The 4G rollout/launches, coupled with attrition due to telecom CXOs moving to ecommerce-type sunrise industries, have led to this hiring and we expect it to stabilise in the short to medium term." The 4G launches have led to a battle of billionaires — with a combination of Mukesh and Anil Ambani, heading Reliance Jio and Reliance Communications, taking on the likes of Sunil Bharti Mittal, who heads India’s No. 1 telco Bharti Airtel, and Kumar Mangalam Birla, who controls Idea Cellular. Vodafone India completes the line of the telecom heavyweights in an intensely competitive sector. 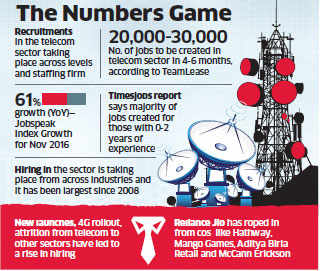 Recruitments in the sector have already taken place across levels and staffing firm TeamLease estimates another 20,000-30,000 jobs will be created in the next 4-6 months.

"What Jio is trying to do is build an entire ecosystem and revolutionalise the way things worked till now. To this end, it has hired a lot of people across different sectors. Other companies are following suit," said a top headhunter who refused to be named.

Although the company did not give the numbers hired since its start of 2012, sources said Reliance Jio grew from 700 employees in 2012 to 17,500 by March this year. "Although there were internal transfers (in the group), most were hired from outside," said the official who did not wish to be named. Jio calls itself a digital services company, rather than a telecom services operator, in a bid to differentiate itself over its would-be competitors.

Nokia in talks with telcos for rural 4G expansion