At the heart of the problem with DGCA’s new rules is a confusion over setting standards. The FAA wants India to adhere to the standards established by ICAO.

By
Binoy Prabhakar
, ET Bureau|
Updated: Aug 10, 2014, 01.50 PM IST
0Comments
Since February, a Cessna Citation CJ2 corporate jet, which on a good day can fly up to 1,700 miles nonstop, has been mostly lying idle at the Delhi airport. The aircraft belongs to developer Supertech Group, which has leased it for Rs 40 lakh a month. Yes, it is the same company that reportedly told the Supreme Court it would face ruin were it to immediately repay customers looking to exit a disputed residential project in Noida.

Supertech wants to use the aircraft to carry its executives to projects located in north India and liaise with government officials. It also harbours a strong desire to enter the charter business.

But the company needs to first receive a non-scheduled operator’s permit (NSOP) from aviation regulator Directorate General of Civil Aviation (DGCA). A year has passed since it applied for one. As it waits for the permit, Supertech has been losing a humongous Rs 60 lakh a month since February — it has to also pay parking and maintenance fees — according to director Mohit Arora. (He denied that the company said it would face ruin or showed an unwillingness to pay customers.)

Supertech’s jet and ergo, its aviation dreams have been shackled by a blizzard of rules contained in the DGCA’s Air Operator Certification Manual. The 267-page thick rulebook, also called CAP 3100, lays down 36 checklists for each operator. Each lists additional compliance tasks and resultant checks, resulting in a regulatory quagmire for aviation entrepreneurs.

Since it was introduced last August, CAP 3100 has become synonymous with long delays in getting permits and “humongous losses” for new aviation entrepreneurs and existing operators. It takes nearly a year to receive a flying permit while NSOP holders have to wait for up to six months to induct aircraft.

The DGCA introduced CAP 3100 (it underwent two revisions in November and March this year) to comply with a safety audit by the UN’s International Civil Aviation Organization (ICAO). That meant the 165 NSOPs in India had to apply afresh with the DGCA and have their operations reviewed. CAP 3100’s introduction was sudden, according to NSOP players, who said this was done under duress to avoid a revision of India’s air safety rating by The United States Federal Aviation Administration (FAA). The FAA still downgraded India, but for no fault of the NSOPs. Rather, it was due to the failure of DGCA to hire enough officials to oversee the safe running of flights. The first to be hit were Indian operators that offer jets on charter to fly abroad. A year later, the review process of CAP 3100 remains incomplete and barring corporate powerhouses like Reliance Industries and DLF, around 20 charter companies still haven’t received permission to fly abroad.

Even operators that passed the CAP 3100 test have to undergo the entire process again if they wished to induct aircraft. It took more than three months for a charter company in Pune to induct an 18-seater Gulfstream 550 into its fleet this year. Likewise, a Delhi-based operator has been knocking on DGCA doors since May to add a Beechcraft King Air 350.

CAP 3100 is understandably a byword of revulsion for NSOPs, but few were willing to speak on record for fear of crossing DGCA officials. “We have no complaints,” said Supertech’s Arora.

Many others were more forthcoming with their grouses against DGCA but wished to remain anonymous. CAP 3100 has led to a massive increase in operating costs, said the head of an NSOP aspirant based in Delhi. “It requires an NSOP holder to create 11 compulsory posts. Hiring of this scale makes operations unviable for a small operator with 1 or 2 aircraft.”

If this rule is unreasonable, there are plenty of unfair ones too. An operator looking to induct a new type of aircraft has to bear the cost of training of DGCA inspectors. Training at least two flight operations inspectors, two airworthiness inspectors and “any other officer(s) of DGCA as specified by DGCA” sets back an operator by nearly Rs 75 lakh. (The FAA, which the DGCA is trying hard to please, operates its own fleet of more than 100 jets and helicopters for inspections. ) CAP 3100 has also turned into a potent tool for harassment. “I was told to resubmit my manual because a DGCA official was not satisfied with the font,” said an official of the Delhi-based NSOP applicant.

Every time a manual is resubmitted with corrections, pat comes a new observation, said DK Mishra, COO, Freedom Charter Services in Mumbai, which is awaiting permission to fly abroad. “It is really frustrating.” Rohit Kapur, president of Business Aircraft Operators Association (BAOA), said the DGCA has implemented a process for which they don’t have their own resources. “We are running from department to department for permissions.” 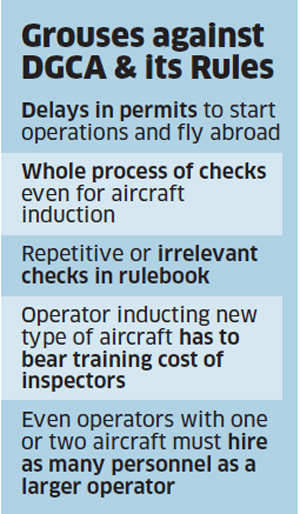 As a last-ditch gambit to avert the FAA downgrade, the government approved the hiring of 75 flight inspectors. The DGCA has so far hired only 35 inspectors, of which only 14 have joined so far, aviation minister Ashok Gajapati Raju Pusapati told parliament recently.

Incredulously, not one DGCA officer has a clue about these certifications, said Mishra. “Small operators have to keep their staff parked at DGCA headquarters at Delhi because approvals move at a snail’s pace.” NSOP players said DGCA views them from the same prism as airlines, which have bigger operations, and whose rules are therefore irrelevant to them. To cite two examples: NSOPs are required to have contracts with ground-handling agencies and refuelling companies.

In May, DGCA head Prabhat Kumar issued a ‘Standards of Services’ document to help applicants avail services and approvals “without procedural delays”. For example, the document has set a timeframe of six months to issue an NSOP licence. Most deadlines remain on paper. DGCA officials have actually told NSOP aspirants they would now receive a permit only after an audit by FAA in December. (A FAA spokeswoman said no visit has been scheduled.) Kumar had no comment for this article.

At the heart of the problem with DGCA’s new rules is a confusion over setting standards. The FAA wants India to adhere to the standards for aircraft operations established by ICAO. India does follow ICAO standards, but wants its regulatory structure modelled on FAA principles. It is not as simple as it looks.

Mark Martin, an airline consultant based in Dubai, said India cannot use FAA standard as a model because the structure of aviation in the two countries is different. “The US is an evolved aviation market — airports and airfields are omnipresent and so are service centres and maintenance facilities. In India, aviation is still a luxury and private aviation is limited to a privileged few.” The increased red tape that has pervaded India’s aviation industry should not surprise given that FAA own regulatory mechanism is similar. For an existing carrier to add aircraft, routes and so on, it takes 30 days in the US. Fresh permits will vary depending on each applicant. Yet, there are key differences.

“In the US too, there is a fair amount of red tape but the rules don’t change that often,” said Alex Wilcox, CEO of JetSuite, a private jet company in California. Wilcox, who was previously COO of the grounded Kingfisher Airlines, said he spent a great deal of his time in Delhi despite living in Mumbai because of the “ ever-changing requirements” of the DGCA.

Martin said Indian rules come with a subliminal “everyone out there will cut corners ” approach while the FAA is more “operators are responsible for their aircraft”. The official of the NSOP applicant said as much: “Isn’t it in our interest that we maintain safety?” He said NSOP players are not saying no to compliance or checks. “All we are asking is some accountability. They [DGCA officials] will kill the sector.”
Read more on
Airfare
Sunday ET
Comments
Add Your Comments
Commenting feature is disabled in your country/region.