What’s driving aspiring doctors and engineers to the edge?

Rise in suicides in Kota sparks criticism that coaching schools have taken in too many students & do not have enough counsellors to help the youngsters cope with the pressure.

By
Varuni Khosla
, ET Bureau|
Updated: Jan 05, 2016, 04.51 AM IST
0Comments
NEW DELHI: “You’re just not good enough, why are you even here in Kota? You’re just wasting your parents’ money!” Perhaps no class in this Rajasthan city is complete without such putdowns hurled at students in the country’s biggest hub of coaching for engineering and medical entrance examinations.

The city has seen about 30 student suicides in the past year, including one this week by 13-year-old Bhanu Kumar. In June, Kota was rocked by as many as five suicides in a single month, sparking mounting criticism that some of top coaching schools have taken in too many students and do not have enough counsellors to help the youngsters cope with the pressure.

Mumbai-based clinical psychologist Seema Hingorany said she’s getting about eight students a day who are suffering from depression, a sharp increase from less than one such student a day just three years ago. 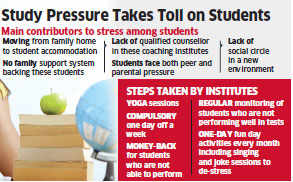 Delhi-based Aakash Institute has increased the number of counsellor for its students to a ratio of 1:2,000 students. In Kota, too, institutes are now coming up with remedial measures such as yoga classes, and de-stressing and relaxation therapies for their students.

Many institutes have now resorted to looking at department-wise monitoring to periodically check the progress of each student. This way, they can be kept track of the situation before it gets out hand. Allen Career Institute, along with other institutes in the city, on the directive of the collector of Kota, has set up a programme for students where they get a compulsory one day a week off, along with a “one-day fun day” class during the month and optional yoga sessions.

“Nearly 1.5 lakh students study in Kota every year. But some students can’t manage stress well. This has pushed us into taking a relook at our systems as well. We’ve included a SMS feedback mechanism as well as CCTV cameras in classes,” said Allen Career Institute’s senior vice-president CR Chaudhary.

Aakash Chaudhry, director of Aakash Institute, which also runs a centre in Kota, said some of the institutes in Kota are unable to limit the number of students they take in as the competition is fierce with other institutes.

According to experts, the pressure is even more so because there is no family support system backing these students and there’s not much that the institutes are doing for disheartened students. “Even the number of students in a class goes up to as high as 300 in some institutes and these are bound to have side effects. Institutes must have career counsellor. Some have as few as one for every 20,000 students,” said Chaudhry.

Hingorany said, “Sometimes institutes don’t have qualified counsellor and they don’t keep information confidential like they’re supposed to do.” She said she feared that the situation may get worse in smaller cities and towns like Kota where awareness levels are lower. Another reason for the stress could be that the students are unable to fall back on a social circle that they are used to in their native places, experts said.

Hingorany cited the example of a 19-year-old student preparing for the IIT entrance exam who said she was feeling extreme loneliness while trying to cope with life in Mumbai.

In 2014, India was ranked as the country with the highest suicide rate according to a WHO report which said that one person commits suicide every 40 seconds globally. As per the report, 2.58 lakh people committed suicide in India in 2012, with 99,977 women and 1.58 lakh men taking their lives. India’s suicide rate was 21.1 per one lakh people, according to the report.

Aasheesh Sharma, CEO of Resonance Eduventures, which runs a coaching institute in Kota, said that most of the suicide cases in the city involved students who were preparing for medical education. “The ones who are studying engineering still have back-up options in the form of NITs if they don’t get into the IITs, unlike medical students. So it’s not just peer pressure and parental pressure, but also the lack of seats that is causing the stress,” said Sharma. He said their institute has an in-house career counsellor and a psychologist and it also does motivational sessions with students to catch any such signs early.

The director at brainSTORM Academy in Indore, Ashish Gambhir said there is extreme pressure on students preparing for IIT/JEE and medical entrance exams especially in cities like Kota where there is no family support.

“Coaching institutes have over 80,000 students and charge close to Rs 3 lakh per student for coaching and stay for about two years. Most students come to Kota from different parts of the country and therefore are living alone. Hubs like Indore and Mumbai will have fewer cases like these as students live with families there,” said Gambhir.

A person familiar with the matter said the teachers at such institutes tend to humiliate students during classes by telling them they’re not good enough, perhaps in their bid to make them improve. “This pressure sometimes can go either way,” said the person, who did not wish to be identified.
Read more on
Women
depression
stress
kota
student suicides
Comments
Add Your Comments
Commenting feature is disabled in your country/region.