The singer delivered a breathtaking rendition of Edith Piaf's "Hymne A L'amour" with images of Paris and its landmarks as the backdrop.

PTI|
Updated: Nov 23, 2015, 01.30 PM IST
0Comments
LOS ANGELES: Singer Celine Dion made a special appearance at the 2015 American Music Awards (AMA) to pay tribute to the victims of the tragic terror attacks in Paris on November 13.

The 47-year-old French-Canadian singer delivered a breathtaking rendition of Edith Piaf's "Hymne A L'amour" amid beautiful images of the City of Light and many of Paris' landmarks, reported E! online.

"Tonight, we honour the victims of the unimaginable violence that has taken place in Paris and around the world. France matters. Russia matters, Syria matters, Mali matters, the United States matters. The entire world matters and peace is possible," Leto said.

Dion's performance received a standing ovation and served as a poignant moment in the otherwise light-hearted show. 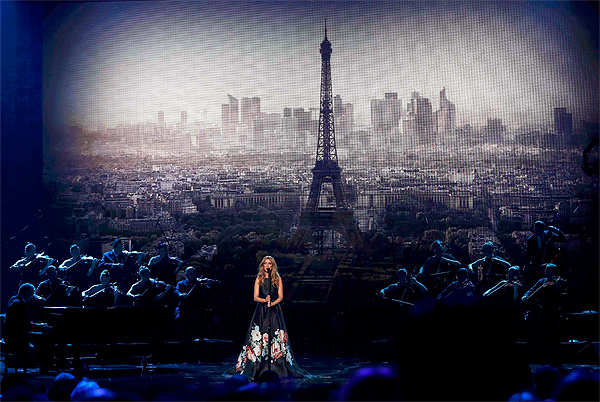 Over 120 people were killed in the ISIS-perpetrated Paris terror attack, with most of those victims attending the Eagles of Death Metal concert at the city's Bataclan venue, including the band's merchandise manager Nick Alexander.

Hits and misses at the American Music Awards