Daniel Dion, who had been battling brain, tongue and throat cancer, passed away at 59.

Daniel, had been battling brain, tongue and throat cancer, according to his sister Claudette, said The Hollywood Reporter.

"Surrounded by his loving family, Daniel Dion, older brother to Celine Dion and eighth child of Therese and Adhemar Dion, passed away peacefully at the age of 59 years old. 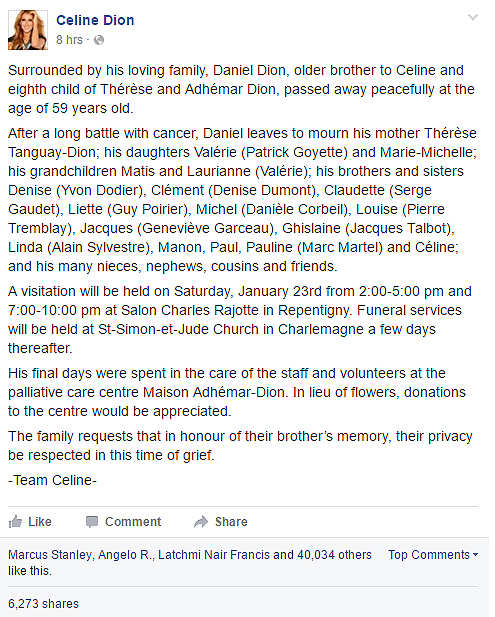 After a long battle with cancer, Daniel leaves to mourn his mother Therese Tanguay-Dion; his daughters Valerie (Patrick Goyette) and Marie-Michelle; his grandchildren Matis and Laurianne (Valerie)... And Celine; and his many nieces, nephews, cousins and friends," it read.

A visitation will be held on Saturday, January 23 at Salon Charles Rajotte in Repentigny.

Daniel will be honored at a religious funeral at St-Simon-et-Jude, in Charlemagne Québec, where the family was raised.

"His final days were spent in the care of the staff and volunteers at the palliative care center Maison Adhemar-Dion. In lieu of flowers, donations to the centerer would be appreciated. The family requests that in honour of their brother's memory, their privacy be respected in this time of grief," the statement concluded.

Angelil, Celine's husband of 20 years and the father of their three children, died on Thursday at age 73 after battling throat cancer.