Sridevi demise: Bathtub deaths aren't as uncommon as you think

According to the 2006 US federal mortality data at least one American died in a bathtub, hot tub or spa a day.

on Feb 27, 2018)
MUMBAI: Bathtub deaths may seem like an alien concept in India but such tragedies are a well-documented medical fact in countries such as Japan and US.

In Japan, sudden bath-related deaths have assumed proportions of a national tragedy with 19,000 deaths occurring annually, according to a study published in the Journal of General and Family Medicine in March 2017. A year earlier, Japan's Consumer Affairs Agency released a report stating that drowning in bathtubs rose 70% over the past 10 years with nine out of 10 victims over 65 years of age. Studies say the Japanese bathing style of using hot water water at temperatures above 41°C could be a contributory factor. Japanese bathtubs are also deeper. 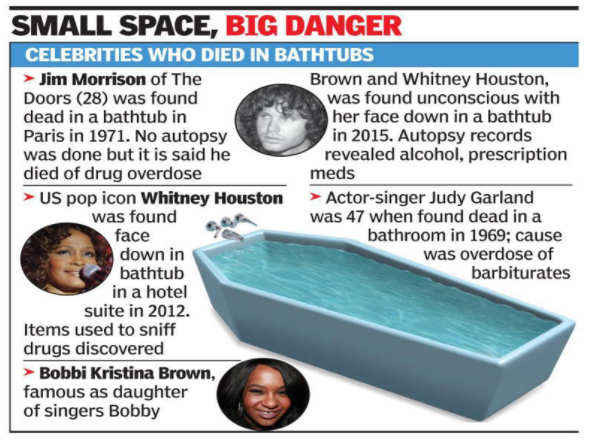 In the US, federal mortality data in 2006 stated at least one American dies in a bathtub, hot tub or spa a day, with most of them high on alcohol or drugs.

The Center for Diseases Control in Atlanta, US, released an exhaustive data in 2015 about how bathrooms-"the smallest room in the house"-could be dangerous. It said over two lakh people aged over 15 visit hospital emergency rooms every year because of bathroom injuries. Of these, 14% need hospitalization. While most accidents occur while bathing or showering, the report said the victims are more often women, perhaps because of their lower-body strength and bone mass.

In India, only a handful of studies have such bathroom-as-an-accident-site data. Moreover, these are clubbed with other household accidents such as fall, burns, scalds and electrocution. A study from Thane Municipal Corporation-run Chhatrapati Shivaji Maharaj Hospital in Kalwa, published in International Journal of Research in Medical Sciences in May 2017, said the incidence of domestic accidents was 1.7% of all accidental trauma; no death from domestic accident were reported in the study.
Read more on
Sridevi
Mumbai
center for diseases control
Anand Gujarat
accident
bathtub deaths

Madame Tussauds to honour Sridevi with a wax figure in Singapore

Janhvi Kapoor gets a stunning black Maybach, and it has a Sridevi connect

Switzerland to install statue of Sridevi