Vijay Varma, bad boy of 'Pink', can't get over his dinner with Big B at Jalsa!

He ran away from home 7 years ago to fulfill his dream of becoming an actor, and the release of 'Pink' is a step in the right direction.

By
Khushi Khanna
, ET Online|
Updated: Sep 23, 2016, 01.49 PM IST
0Comments
Vijay Varma is living the dream. After years of struggle and cameos in a few films, the actor seems to have finally got his due with the much acclaimed 'Pink'. As Ankit Malhotra, the violent-sexist Delhi guy in Shoojit Sircar's ground-breaking film, Varma holds his own among the ensemble cast. The film is Bengali director Aniruddha Roy Chowdhury's debut Hindi venture.

The actor is now all set to star in Tigmanshu Dhulia's next two films, 'Yaara' and 'Raag Desh'. But for now, he is enjoying every moment of this well-deserved acclaim.

We caught up with him to discuss his love for movies, being star-struck by legendary co-star Amitabh Bachchan, and making the not-so-easy shift to tinsel town.

Here are some excerpts from a telephonic interview:

It's been quite a journey for you from Hyderabad to Bollywood. How did the shift happen?
It has been one long journey. I was born and raised in a conservative Marwari family that had nothing to do with films and had no inclination towards watching cinema. I grew up in an environment where we weren't even allowed to watch TV.

However, I was like a frog in this little pond that always stood out. Acting professionally was never on my agenda and I had never imaged doing this as it was completely against the laws of the family.

But there was this feeling of being something special, and I wanted to only nurture that. So I started doing theatre, secretly. I performed in five plays, none of which my family knew about. Nobody had seen them. It was only when one day they saw my picture in the newspaper from a play I had done, that they finally found out.

And then what happened?
I had to run away from home to go to the Film and Television Institute of India (FTII) in Pune to study acting. I completed all the admission formalities on my own, gave interviews, and attended workshops without telling anyone. I told my mom only after I had been selected.

I borrowed money from a friend and packed my bags, and left. Only after leaving did I telephone my dad to say that I would be going for two years. And all he said was don't ever come back.

Bombay can be a tough master. How did the decision of running away turn out?
I had to go through seven years of torture. Even though I was happy that I was doing what I wanted to, a part of my heart always hurt because at the end of the day I didn't have my family's validation.

I think they made peace with my career path only after 'Rangrez' where the film and my performance received good reviews.

But with 'Pink', things have now gone to another level. The film has been received so well, that we are all very over-whelmed right now.. 'Pink' has become a people's film now.

How did the decision to play a negative character so early in your career come about?
For me the decision was made as soon as I read the script. Honestly, I was blown away by the it.

The plot covered a very relevant issue, and it had so many voices. It wasn't just the women's voice that was depicted, but the entire society's - family, neighbours, parents, politicians. All the colours of the palette have been used to create this painting. And even though I knew I was a very dark stroke in the painting, I wanted to be a part of it.

As an actor, it was a challenge. However, the fear of being typecast was never there because I have enough variety of work coming out in the next few months to balance this bad boy image. 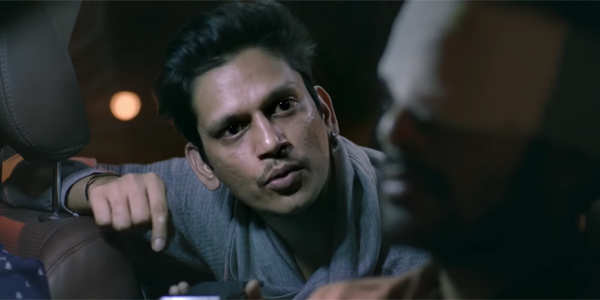 A still from the film where Varma portrays the character of a violent Delhi boy. (Image: Agencies)

It is a very dark role. How difficult was it to play a sexist, Delhi guy?
I knew that if I were to play Ankit Malhotra, I wanted to do justice to the character. I saw the Delhi audition rounds of reality shows like 'Roadies' and 'Splitsvilla' to pick up the body language and attitude. That was the biggest material for my preparation. I also met a friend from FTII who is originally from Delhi to learn more about the language and diction.

The film also features Amitabh Bachchan, a legend in his own right. What was working with him like?
Being on the same set as Mr. Bachchan was a huge high. A film set is usually one of the noisiest places around. But every time Mr Bachchan came on set, the energy changed. It became a sacred space. Everyone would talk in whispers, it felt like going to a temple or church.

For him, his work is scared. And that is something we all learnt from him.

Even though he is such a legend, he is also very warm and welcoming. On my second day of shoot with him, I saw Taapsee Pannu photobomb him while he was rehearsing, and instinctively I did the same. But after that I was so scared (since I hadn't interacted with him ever) that I ran away without even turning back. But what he did the next day made us all respect him even more. He came in, and called us to look at something on his laptop, and there it was, the picture of me photo-bombing him. He had posted the picture on his blog, and just like that the ice was broken, and he had made us all so comfortable. 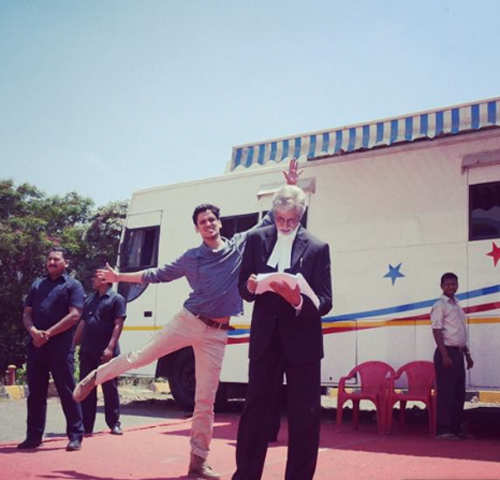 Amitabh Bachchan shared the picture of Vijay Varma photobombing him on his blog. (Image: Agencies)

You also had a meal with the Bachchans at Jalsa?
After we had wrapped up the shoot, I received an SMS inviting me for dinner to Jalsa, with a sign-off from Mr. Amitabh Bachchan himself. That was by far one of the most ecstatic moments of my life. I actually checked the number on Truecaller, just to be sure! And he had sent that personal message to all of us. It was such a beautiful gesture.

But what followed was even more humbling. On the decided day, we all went to his house, and there we saw him waiting to welcome us on the porch. We were later joined by Abhishek, Shweta, and Aishwarya, and it was a quiet, lovely evening spent with them.

I also managed to get a signed DVD of 'Piku' from him for my mother! 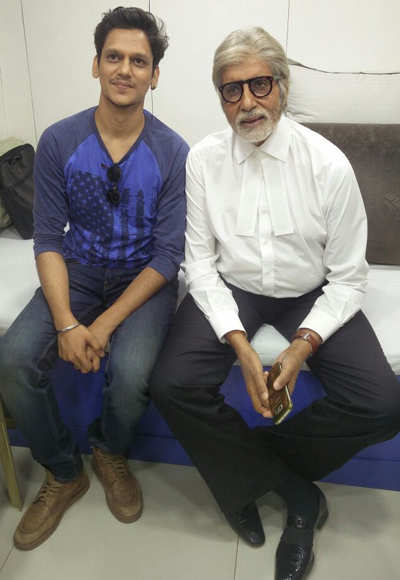 On the set of 'Pink' with the legendary Amitabh Bachchan.

Considering the rest of the cast is fairly young too, what was your equation with the other actors?
I met the cast the first time on the set and we were all new people. The best part about shooting for the film was that it was treated like a theatre. We all would meet in the office and complete our morning exercises, so we knew the work is being approached in the right manner. The entire film was one unit. There was no differentiation. And that's the reason we all formed natural, organic relations with each other. That is what reflected on screen. Today, I know Angad, Taapsee as friends. We know each others' secrets, and that's the relationship we share.

Pink ball will bring the crowds back: Dravid

Against pink ball, every ball was a test: Wriddhiman Saha

India vs Bangladesh Kolkata test: Pink is the new red