Multiple states have sold around Rs 2.33 lakh crore worth of Uday bonds.

MUMBAI: A cocktail of factors including the impact of the Goods and Services Tax on state finances and excess supply has spiked investor confidence boosting yields by 85 basis points over the sovereign benchmark bond against the normal 40-50 basis points gap normally seen at the beginning of the financial year.

“The market is a bit jittery amid more paper supplies,” said Soumyajit Niyogi, associate director at India Ratings. “With GST coming in, the market looks for possible impact on state finances. The gap between state bonds and the benchmark G-sec bonds are unusually high at this point of time, some kind of fatigue is very much visible from investors side.”

“States Bonds and Uday bonds are also crowding out the market, pushing yields up in other segments," he said. Bonds of states like Uttar Pradesh, Andhra and Odisha offer yields between 7.51-7.53 per cent, according to the latest RBI auction last week. The yields were even 5-7 basis points higher in the preceding auction. The benchmark bond yielded 6.66 per cent on Tuesday. Uday bonds are a bailout package for defaulting state power distribution companies run by state governments where banks subscribe the securities, which are traded in the secondary market with interested fund houses and insurers. 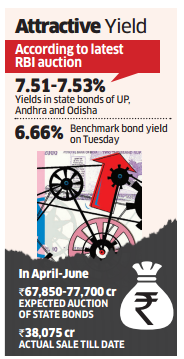 Multiple states have sold around Rs 2.33 lakh crore worth of Uday bonds. States are expected to sell another Rs 36,000 crore this financial year. In April-June, the Reserve Bank of India is expected to auction Rs 67,850-77,700 crore state bonds, known as state development loans or SDLs in market parlance. So far, they have sold Rs 38,075 crore worth of such securities. “State bonds could now be the most attractive play among debt investors,” said Ajay Manglunia, executive vice president, Edelweiss Fin. “Some market participants may be shying away from market as investors look a bit worried over supply side and GST issues. But, state bonds, backed by RBI, show little default possibility.”

“The existing fear will soon die down as almost every state is spending more on infrastructure building with the central government keen on improving state fiscal positions," he said. In the last seven fiscal years, state funding through SDLs have trebled in the first quarter itself. It was as low as Rs 24,523 crore in 2011-12.

States have been spending more mainly on account of capital expenditure, which is a long-term credit positive, says India Ratings and Research. Both short term and long term impact on states fiscal due to GST is “known unknown” risk for the investors as some traders fear the immediate impact on state finances might be strong enough, said a fund manager, who is not authorised to talk the press.

Investors have been raising concerns on the increasing fiscal deficit of the state governments. The combined fiscal deficit of the states in FY16 (RE) has increased to 3.6 per cent of GDP, highest since FY04 (4.2 per cent of GDP), India Ratings said citing latest RBI data.
Planning to invest in stocks? Now, shortlist scrips at the click of a mouse with ETMarkets Stock Screener.
Read more on
bonds
GST
gdp
Bailout
Edelweiss
reserve bank of india