Gold climbs to higher levels due to Brexit fears

International gold prices have become extremely volatile due to ‘Brexit fears’, which refers to concerns that the British voters may decide to leave the European Union in the June 23 referendum.

MUMBAI: International gold prices have become extremely volatile due to ‘Brexit fears’, which refers to concerns that the British voters may decide to leave the European Union in the June 23 referendum.

Each new opinion poll results are adding to the confusion and also to the volatility. 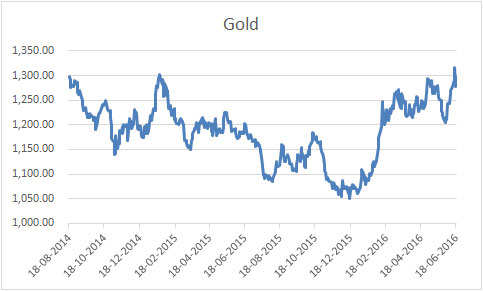 “There will be a lot of volatility close to the event and the gold price may climb back to the major resistance zone of $1,325-1,330 by then,” said Priti Gupta, managing director at Anand Rathi Commodities.

And the final outcome from the referendum is also going to be crucial. “Since Brexit (if happens) will change the economical and geopolitical landscape of Europe, gold will jump up further – may be to around $1,400,” said Gupta.

The impact on domestic gold traded in rupee will also be significant. “If Brexit happens, the spike in domestic gold will be much more,” Gupta added. This is because the dollar will also appreciate (ie rupee will depreciate) along with gold due to this heightened risk aversion.

But what will happen if voters decide against Brexit on June 23?

Since this will remove the need for safe haven assets like gold, its upside will be limited. However, experts are not predicting major downside either. “Since gold is in an uptrend now, downside from current level is limited,” said CP Krishnan, wholetime director at Geofin Comtrade.

Oil prices coming up once again to $50 is one reason for this. Since the US economy is not picking up as expected, the Federal Reserve also may not go for rate increase in the next 3-4 months. “$1,280 is a major support for gold and if that is broken, support should come at $1,250 levels,” said Krishnan.