Ahead of Budget and polls, Trump rhetoric may scare the bulls, weaken rupee

Since November 8, when the US elected a new president, the dollar index, which measures the unit against six major currencies, has gained more than 3% till now.

By
Saikat Das
,
Anandi Chandrashekhar
, ET Bureau|
Updated: Jan 23, 2017, 03.03 PM IST
0Comments
MUMBAI: US President Donald Trump's `Buy American and Hire American' slogan may rock the markets and weaken the rupee as his relentlessly protectionist rhetoric shows no signs of being muted by ascent to office. The rupee could plumb new lows of 70 against the dollar in the next few months, experts estimated. 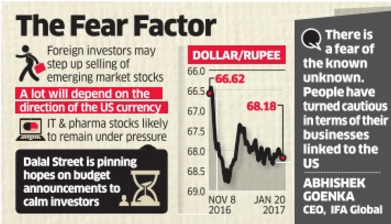 Trump's quest for a strong dollar and relative declines in the Chinese yuan could undermine the rupee, sending it down by as much as 3% to the greenback as the 45th president vows to push the sluggish US economy to grow faster. Domestic events such as the February 1 budget and the state elections are being keenly watched and could fuel the uncertainty , depending on how they're received.

“Expect dollar to strengthen over next three to six months as Trump unveils his policies,“ said MS Gopikrishnan, head of foreign exchange, rates and credit at Standard Chartered Bank. “Rate hikes could come faster if he resorts to fiscal stimulus path for growth. All emerging market (EM) currencies including the rupee will come under pressure.“ To be sure, events such as Brexit and Trump's election last year weren't as calamitous for the markets as had been predicted at the time but a weaker rupee could prompt foreign investors to flee emerging markets.

A nervous Dalal Street is pinning hopes on the budget next week as an opportunity for the government to calm investors.

“The markets can be weak in the coming days leading up to the budget,“ said Mahesh Patil, co-chief Investment officer, equity, Birla Sun Life Mutual Fund. “If the dollar keeps strengthening, FIIs (foreign institutional investors) would look to sell some more.“

A strong showing by the opposition in the state elections in February and March could further undermine sentiment, Gopikrishnan said.

“If the NDA (the Bharatiya Janata Party-led National Democratic Alliance) loses in the crucial states, the rupee could come under further pressure as the central government will find it difficult to push through its reforms agenda,“ he said.

DOLLAR THREAT
Since November 8, when the US elected a new president, the dollar index, which measures the unit against six major currencies, has gained more than 3% till now.

With this, many market participants expect the dollar to strengthen while the rupee could well slide as low as 70 against the US currency in the next few months.Foreign portfolio investors (FPIs) sold `43,647 crore of domestic debt securities last year as the spread or gap between India and US sovereign bond yields, a key trigger for global investors betting on riskier emerging markets, narrowed by about 182 basis points in the past one year. A basis point is one-hundredth of a percentage point.

“The entire emerging markets space has and will see investment outflows amid the expected dollar strength,“ said Ashish Vaidya, head of trading and asset liability management at DBS Bank. “FPIs are unlikely to flow back to India with contracting bond yields between US and India.Turmp's policy announcements in the next few we eks will be closely watched with an element of uncertainty as a new US President assumes charge. Markets will seek clarity from his policy statements, aimed at spurring growth within the US and its impact on the world trade.“

Total investment returns include spot exchange rates and interest income.The rupee has returned a negative of 0.94% versus a marginal positive of 0.06% by the Chinese renminbi, ranked sixth. “There is a fear of the known unknown,“ said Abhishek Goenka, CEO of IFA Global. “People have turned cautious in terms of their businesses linked to the US. Importers are increasingly covering their unhedged positions for close to two-month maturities in forwards while exporters are going slow expecting further weakness in the rupee's value.“

Trump, Merkel and Imran to visit WEF at Davos