The SC highway liquor ban that came into effect on April 1 was a hammer blow and now Madhya Pradesh plans to impose prohibition in a phased manner.

MUMBAI | BENGALURU: There hasn’t been much to cheer about for the alcoholic beverage business in past few months, given the drift toward statewide drinking bans and tightening regulation. The Supreme Court highway liquor ban that came into effect on April 1 was a hammer blow and now Madhya Pradesh plans to impose prohibition in a phased manner.

The business is fast becoming unattractive, according to companies and analysts. No surprise then that investor interest in liquor stocks is flagging, given persistent regulatory woes and risks of further earnings downgrades in FY18. They have underperformed in the past year, with India’s largest spirit firm United Spirits losing nearly a fifth of its value.

Analysts are urging investors to avoid liquor stocks until there’s regulatory clarity. While it took a decade to add 12,000 licensed branded liquor outlets in the country, twice as many are estimated to have shut after the Supreme Court banned sales of alcohol within 500 metres of national and state highways. Hotels, restaurants and pubs have also had to stop serving alcohol. 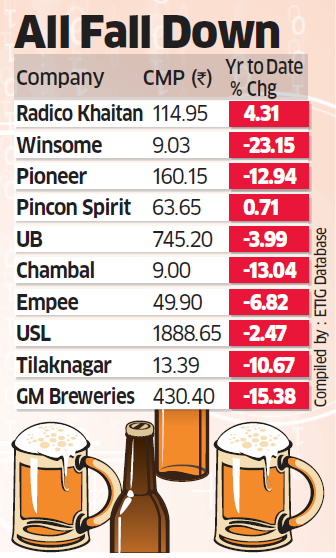 "It is becoming a tough environment to be in," said Jeetu Hemdev, executive director at Allied Blenders, which sells Officers Choice, the country’s largest brand by volume. "In a democratic country, you can’t curb consumption like this. Going forward, illicit liquor sale will increase."

In the past month, some states have also imposed new marketing practices. Haryana has consolidated three distributors into one while West Bengal has changed its retail model to a government-led sales channel. At 86,000 shops, India anyway has one of the lowest number per 1,000 people in the world. While Madhya Pradesh accounts for less than 3% of outlets, the move is being seen as yet another of the frequent policy changes in an already highly regulated market. "It is a difficult working environment and it has always been volatile," said Shekhar Ramamurthy, managing director at United Breweries, which controls more than half the country’s beer market. "We need to keep a close watch on the changes and have plans to mitigate them. Not all the policy changes can be predicted."

‘NOT AN EFFECTIVE TOOL’
Prohibition is not an effective tool to address alcohol misuse, said Abanti Sankaranarayanan, chief strategy and corporate affairs officer, United Spirits. "On the contrary, prohibition gives rise to other social ills such as illicit alcohol, bootlegging and crime," she said. "State governments lose revenue that can be used for social development. It also criminalises responsible drinkers. Rather than sweeping measures, we need to have targeted interventions that address harmful drinking patterns in a targeted way."

Since last year, Kerala, Bihar and Tamil Nadu -- which account for 20% of the country's alcohol consumption -- have banned liquor either completely or in a phased manner.

This is despite taxes on alcohol, on average, accounting for about 16% of overall revenue collections of state governments. In India, states levy taxes on alcohol, while the federal government levies duties on imports. At the same time, state governments control manufacturing, distribution, retailing and pricing of liquor, which in turn, hurts profits. To be sure, Kerala is said to be rethinking the ban. Carlsberg India chief executive officer Michael Jensen said last year that India was the most difficult market in the world, referring at that time to Bihar’s imposition of prohibition after he invested $25 million to set up a plant near Patna in 2014. "It is very detrimental for investor confidence," Jensen said at the time.

Liquor stocks have taken a hit -- United Spirits has declined 23% and United Breweries has fallen 22% in the past six months. GM Breweries’ share value has eroded by 26.9% and Tilaknagar Industries by 19% during the same period. Many stocks are trading below their 200-day simple moving averages on technical charts, suggesting that they are in a long-term downtrend.

While India is moving toward a simpler regime through the upcoming goods and services tax (GST), liquor has been kept out of its ambit, a concern in terms of profitability, executives said.

"While the liquor industry is not included in GST, our raw materials including recyclable bottles will be taxed," said a senior official at an international liquor firm. "The duplication in taxes will result in higher input cost but prices will still be controlled by the government." Ambit Research said in an April 7 report, which gave a ‘negative' rating on the industry, that the regulatory environment is getting tougher, referring to the ban on direct advertising, rising taxes on inter-state movements, prohibition and judicial orders.

WILL OTHER STATES FOLLOW MP?
"The sector is likely to underperform and see downgrades in numbers," said Abneesh Roy, senior VP at Edelweiss Financial Services. "About 30-35% liquor stories are near highways. While not all will get closed, we estimate a high single-digit impact on volumes." Liquor sales in India slowed to 0.4% in the first nine months of the financial year, the slowest growth in a market that’s been expanding rapidly since 2001, with a compounded annual growth rate of over 12% in the decade to 2011.

The top three -- United Spirits, Pernod Ricard and Allied Blenders, which account for 60% of overall sales -- had zero growth by volume in the April-December period.

The impact of the ban in Madhya Pradesh, which contributes 4-5% to overall volume, will be limited, said Roy.

"The ban will affect mid and lower-priced liquor as the state is not a hub to a large employment centre like in Karnataka," he said. "The last two years have seen the worst of regulations. One bright side has been Kerala looking at lifting the ban as the government has realised that it is impacting tourism." The concern is that other states might follow Madhya Pradesh rather than Kerala.

"Madhya Pradesh hardly matters in terms of market share but if such actions spread to other states, it will be hugely negative," said AK Prabhakar, head of research at IDBI Capital. He advised avoiding the sector until there is clarity on these potential headwinds. "For example, there is talk that Daman and Diu (a union territory) may be merged with Gujarat, which is a dry state, in order to curb the flow of liquor there."

Dhiraj Sachdev of HSBC Asset Management also cited policy headwinds. "Companies need to readjust their distribution setup across states, which will take time," he said.
Why You Invest the Way You Do: The Science Behind the Art of Investing
Read more on
liquor ban
Supreme Court
United Spirits
Pernod Ricard
Allied Blenders
Officers Choice
SC highway liquor ban
Comments
Add Your Comments
Commenting feature is disabled in your country/region.