At the end of the quarter, the central government’s holding was close to 16.4 per cent compared with 14.6 per cent at the end of March.

By
Jwalit Vyas
, ET Bureau|
Last Updated: Aug 15, 2014, 04.00 AM IST|Original: Aug 15, 2014, 04.00 AM IST
0Comments
MUMBAI: The share of foreign institutional investors in the market capitalisation of BSE500 has dropped to 19.56 per cent at the end of June from 19.81 per cent three months earlier despite these funds pumping in $5.8 billion into Indian equities during the quarter, indicating underperformance of the FII group. This was primarily because of FIIs’ underweight stance on outperforming sectors — state-run banks, utilities, industrials and metals — prior to the quarter, said a Credit Suisse report. 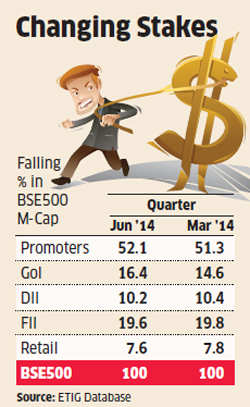 Since then, FIIs have turned bullish on these stocks, participating in the euphoria around the government change in New Delhi. According to the report, FIIs have bought state-run and private banks, real estate, power utilities, healthcare and telecom and have now gone underweight on consumer staples. The strong performance of public sector companies over the past few months has helped improve the share of government in the BSE500 market capitalisation.

At the end of the quarter, the central government’s holding was close to 16.4 per cent compared with 14.6 per cent at the end of March.
Why You Invest the Way You Do: The Science Behind the Art of Investing
Read more on
real estate
FII
Healthcare
Private banks
power utilities
BSE500

India too old-fashioned in the EM story for FIIs: Mark Matthews

Mutual funds, FIIs cut holdings in this multibagger in Q3