tapariatata motors
EXPAND TO VIEW ALL
Foreign investors' bullish derivatives bets on India are at the lowest levels of 2017 amid the ongoing risk off sentiment in emerging market sparked by the escalating tensions between the US and North Korea. As the war of words between the two countries is showing no signs of ending, analysts feel foreign investors are likely to continue their selling spree in Indian markets, which may drag the Nifty down by another 150-200 points. 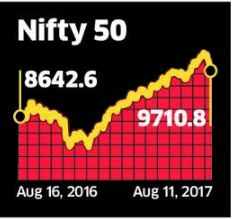 The long-short ratio -the extent of bullish bets compared to bearish bets -of foreign investors index futures positions has decreased from 84.1 per cent to 57.8 per cent, the lowest level in the calendar year so far, said analysts. A low reading of this measure suggests uncertainty .

“FIIs have taken bearish bets on in index futures worth `1,408 crore on Friday . With this, FIIs have cumulatively shorted more than 1 lakh contracts in index futures in the August series,“ said Jay Kumar Purohit, technical and derivative analyst at Centrum Broking.

The geopolitical tensions pulled down major Asian markets by 1-3.5 per cent in the week ended Friday , with the Sensex and the Nifty indices falling the most. Indian markets posted their worst weekly performance in 18 months last week, with rising India-China border tensions also dampening sentiment. Weak set of earnings from blue chip companies such as State Bank of India and Tata Motors also weighed on the market.

Volatility has made a come back in world markets, with Dalal Street's own fear gauge rising to its highest level since February on Friday.

In the derivatives segment, foreign investors' net short positions were at 1,38,083 contracts as against 31,239 at the beginning of the August series.

“Foreign investors have heavily added short positions since the start of the series, hence the de crease in long-short ratio,“ said Sneha Seth, a derivative analyst at Angel Broking.

Derivative analysts said investors should brace for another 150-200 points fall in the Nifty in the near term.

“FPIs have been buying puts and selling calls, while their activity in the futures segment has been more on the shorts side. We expect the index to fall to 9,550 levels,“ said Chandan Taparia, derivative analyst at Motilal Oswal Financial Services.

In the options segment, the high est concentration among put options has shifted lower to 9,500 strike from 9,800 strike earlier.

Seth of Angel Broking said the index could see a deeper fall to 9,200-9,300 levels if the important support of 9,500 is broken.
Planning to invest in stocks? Now, shortlist scrips at the click of a mouse with ETMarkets Stock Screener.
Read more on
motilal oswal financial services
north korea
Risk
state bank of india
FIIs
centrum
taparia
FPIs
sensex
tata motors

FPIs pumped money into these 10 smaller stocks, too