Mistry claimed he was a lameduck chairman and highlighted how his efforts on de-leveraging the debt-laden group met with resistance.

In three days since Cyrus Mistry was replaced as the chairman of Tata Sons, the group companies have lost over Rs 26,000 crore in market capitalisation. Software behemoth TCS managed to buck the trend with a fall of only 0.6% since Monday’s close.

On Thursday, Tata Teleservices (Maharashtra) suffered the most with shares falling 10% to Rs 6.7. Indian Hotels fell 10% intra-day and closed with a loss of 4.18% at Rs 114.65. Tata Steel recovered most of its intra-day fall and closed down with a loss of 0.44% at Rs 397 after Chief Financial Officer Koushik Chatterjee assured investors that it is staying the course on its strategy of downsizing.


Also Read: Mistry's strategy 2025 was rejected by Tata Sons board 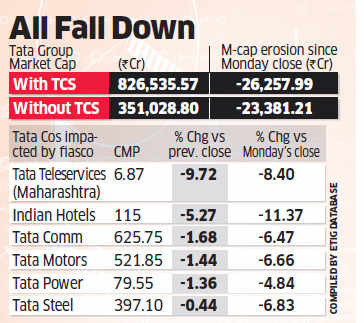 “Tata stocks will fail to attract new buyers as long as uncertainty and controversy continues,” said Raamdeo Agrawal, cofounder & JMD, Motilal Oswal Financial Services. “De-rating of the stocks has already happened due to the controversy. Earnings of Tata companies will now be key for any re-rating. If they report good earnings, all the controversy will be forgotten or buyers will come only at significantly lower price.”

Since Monday, Tata Metaliks, the top loser, has crashed 12.96%, Indian Hotels has slipped 11.37% and Tata Global Beverages has fallen 10.33%. Tata Teleservices fell 8.4% and Tata Sponge was down 7.43%. Among other large companies, Titan, Tata Power, Tata Communications, Tata Motors, Tata Steel, Tata Investment Corporation, Tata Coffee and Tata Chemicals are all down by 2-7.5%.

“Mistry’s contribution towards TCS has been marginal at best as the company was not facing any problems whereas in other companies he has been more directly involved as they were facing issues. So TCS in all this is relatively immune as the company was well run even before Mistry came in,” said Vinay Khattar, head of research at Edelweiss Securities.

Tata Sons Chairman Cyrus Mistry was sacked on Monday after the board led by its largest shareholder Tata Trusts refused to back him. On Tuesday, Mistry wrote to the board, accusing the directors of neglecting their fiduciary responsibility and terming his sacking invalid and illegal. He also cited alleged irregularities in business dealings and warned of potential writedowns of $18 billion.

Mistry claimed he was a lameduck chairman and highlighted how his efforts on de-leveraging the debt-laden group met with resistance.

Tata Motors so far has lost more than Rs 8,000 crore in market cap, TCS has lost Rs 6,000 crore and Tata Steel over Rs 2,600 crore. Indian Hotels, Tata Global, Tata Chemicals, Tata Power, Voltas and Titan were among other group companies that saw between Rs 200 crore and Rs 1,000 crore worth of market cap being eroded. Tata Group stocks fell between 5-20% in the past 3 days.

“Cutting down excess debt and de-leveraging the group in current the economic environment was the move in the right direction that Mistry had embarked upon,” said Samir Arora, fund manager, Helios Capital. “Markets are more upset at the way things were handled by the board of Tata Sons, which is why de-rating of stocks has happened and an overhang could continue till uncertainty fades.

There are no winners to the ongoing spat but shareholders are the losers.”
Why You Invest the Way You Do: The Science Behind the Art of Investing
Read more on
ratan tata
BSE
NSE
Tata Sons
Cyrus Mistry
Comments
Add Your Comments
Commenting feature is disabled in your country/region.