Sector not out of the woods yet, say analysts.

However, analysts said the jump in these stocks is unlikely to last beyond two to three sessions. 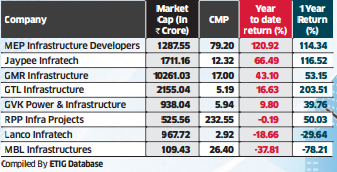 Others such as Jaypee Infratech, GTL Infra and RPP Infra jumped 5-7 per cent.

“There has been considerable distress in the stocks and they have been under pressure for the last four-five years. Anything that refl ects receding stress leads to interest in the sector,” said Dhananjay Sinha, head of research at Emkay Global.

Gross debt came down to Rs 19,856 crore from Rs 37,480 crore in the previous financial year and net debt to EBITDA (earnings before interest, taxes, depreciation and amortization) ratio improved to 4.3 from 10.2 in FY16. In the March quarter, the company’s standalone net loss widened to Rs 2,478.7 crore from Rs 1,787 crore a year ago.

In the liquidity-driven rally in domestic stock markets this year, shares of GVK Power, GMR Infra, GTL Infra, Jaypee Infratech and MEP Infra have gained 10 to 121 per cent.

A few such as Lanco Infratech, MBL Infra and RPP Infra have fallen 0.2- 38 per cent this year.

“News flow-led positive sentiments can lead to two-three days of up-move but skepticism will remain till the over-leveraged companies show sustained improvement in their leverage ratios and operational performance in the balance business,” said Deepak Jasani, head-retail research at HDFC Securities.

The sector has been saddled with debt woes for several years now and also one of the major contributors to the bad loans mess in the banking sector.
Planning to invest in stocks? Now, shortlist scrips at the click of a mouse with ETMarkets Stock Screener.
Read more on
stocks
Shares
infra
GVK power
GMR Infrastructure
Jaypee Infratech
Emkay Global
Lanco Infratech
MBL Infrastructures
GVK Power & Infrastructure