PC Jeweller Ltd.Titan
EXPAND TO VIEW ALL
Mumbai: Shares of jewellery companies rose in a lacklustre market on hopes of strong festival season demand following the recent fall in gold prices. Analysts said most of these stocks are trading bets as they are not sure if appetite for jewellery would remain strong for long. Tata Group's Titan is the safer bet in the sector though the stock has discounted most of the positives.

The bank rate of gold, which was quoting at a discount of up to 5% to that available in the local market in July, is now at parity. This is on account of a crackdown on gold smuggling and a slow pick up in demand largely because of rupee price having dipped by over 5% since September 29. For instance, the front month gold contract on commodity MCX, which mimics the spot price ex-VAT, has fallen 5.38% to Rs 29,578 per 10 gm, be tween September 29 and Oct 7.

“The income disclosure scheme that ended last month probably induced some in the trade to disclose their black money, pay tax on the same and move to dealing in white only,“ said Rajesh Khosla, MD, MMTC Pamp, a leading nominated agency for bullion imports. “The recent fall in international gold price has spurred festive purchases. Both these developments have brought about parity in the market.“

A sharp decline in official demand was borne by a fall in net imports of gold into the country. World Gold Council (WGC) data shows net gold imports declined 41% in the first half of calendar 2016 from year ago.Precious metals consultancy GFMS data shows imports in the third quarter at just 73 tonnes, versus 262.9 tonnes last year. A few in the market believe that this was because of a jump in unofficial imports.

Some analysts feel the optimism in jewellery stocks could be short-lived.

“Fundamentally, nothing has changed and they have gained along with rise in the midcaps. In fact, factors like mandatory PAN for transactions above `2 lakh, gold bond scheme and focus on curbing black money will affect long-term volume growth,“ said Manish Bhandari, CEO, Vallum Capital. 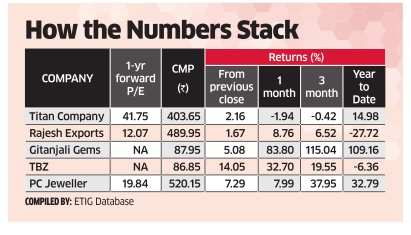