We expect a modestly negative opening on Thursday, but the 9,150-9,170 zone will continue to provide a bottom and inherent strength on the charts.

We had mentioned in Wednesday’s note that some amount of volatility is expected to creep in at higher levels of the market. In line with that projection, the equity market had a volatile session on Wednesday. Though the benchmark Nifty50 came off from its intraday lows, it still posted a minor loss of 33 points, or 0.36 per cent. The Nifty50 has created a fresh congestion area over the past couple of days. We expect a modestly negative opening on Thursday, but the 9,150-9,170 zone will continue to provide a bottom and inherent strength on the charts.

Friday being a trading holiday, Thursday will be the last trading day of the week. The 9,250 and 9,295 levels will act as immediate resistance for the Nity50 while supports will come in at 9,150 and 9,125 levels.

The Relative Strength Index or RSI on the daily chart stood at 60.8153 and it remains neutral. The daily MACD stays bearish, trading below its signal line. No significant formations were observed on the candles. 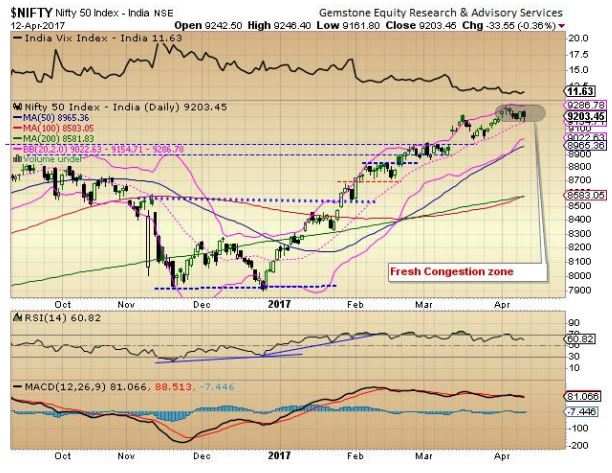 On the derivatives front, the Nifty April futures have 93,525 shares or 0.44 per cent in Open Interest. This figure is small enough not to suggest any change in underlying sentiment.

Pattern analysis suggests creation of fresh congestion area over last couple of days. The Nifty50 showed strong multiple bar support in the 9,150-9,170 zone. This zone was created after the occurrence of the breakout by the Nifty50 and its recent retracement from its immediate highs.

1. RPP Infra Projects: Buy this stock above Rs 275 with a short-term target of Rs 320. After marking highs near the Rs 362 level, the stock has completed 50% retracement of its immediate uptrend and has reversed the trend. The daily MACD remains in continuing buy mode and the RSI has shown positive divergence against the price. The emergence of Morning Star on the candles shows the likely potential of upward move in prices over coming days.(Any call on this above the prescribed level would be positional and not intraday.)

2. ACC: Buy this stock above Rs 1,495 with a short-term target of Rs 1,550. After forming double bottom and reversing its trend from 1300 zone, the stock is in upward rising channel. Currently, it rests near its 200-DMA and shows likely continuation of uptrend. The daily MACD is in continuing buy mode and RSI is neutral. The Relative Strength of the stock against NIFTY is rising and the stock is expected to show relative outperformance over coming days.(Any call on this above the prescribed level would be positional and not intraday.)

Bank Nifty may outperform in near term, catch up with Nifty

Why follow tips? Choose your winners rationally in 3 simple steps!