Analysts expect that FY18 will be the second consecutive year of volume growth after a series of declines between FY10 and FY16.

Godfrey
EXPAND TO VIEW ALL
ET Intelligence Group: After staying range-bound for several years, stocks of cigarette makers have started touching new highs now that fundamental factors seem to be favouring the sector.

Analysts expect that FY18 will be the second consecutive year of volume growth after a series of declines between FY10 and FY16. While this is a positive for all the cigarette companies, VST Industries appears to be better placed.

VST, a Hyderabad-based cigarette maker, has 8% market share through its brands Charms, Charminar, Gold and Moments. It is the only cigarette company which has been able to successfully launch two new expensive brands -Total and Edition -in the last two years and has strong presence in the southern and eastern markets. Despite a difficult environment, the brands have done well. 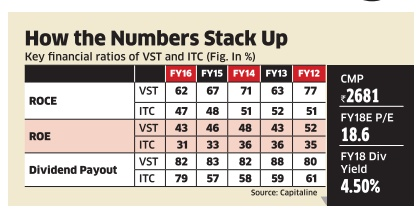 Thanks to the higher contribution from these two brands, VST's cigarette realisations for the December quarter rose by 12.5% and gross margin contribution per stick increased by 5% year-on-year. The contributions of these two brands are estimated to be around 10% of the total revenue, which is expected to double in the next two years.

Why is VST a better bet than ITC and Godfrey Phillips? While analysts expect ITC to deliver 15.5% earnings growth over the next two years, VST is expected to grow earnings by 22%. In the first nine months of FY17, its earnings grew by 17.6% compared with 8.6% growth in ITC's earnings.Godfrey Phillips' earnings dropped.

Also, ITC's significant chunk of cash flows would be utilised to grow its FMCG business, which is still loss making and it also has a cash guzzling hotel business.

In comparison, VST's additional cash flows will come as dividends. It has a consistent track record of paying more than 80% of net profit as dividend. Godfrey Phillips has significantly lower return ratios and dividend pay-out. Given its lower price points, VST would be the biggest beneficiary once GST rolls in.

Stand-out stocks and stand-out companies seldom get noticed in troubled times. ET delves into financial performance of India Inc every week to identify stocks and companies that have bucked the trend to emerge stronger. This week, we present VST, a leading cigarette maker.
Why You Invest the Way You Do: The Science Behind the Art of Investing
Read more on
premium
ITC
Gold
brands
market share
stocks
Dividend
VST Industries
Phillips
Godfrey

More women putting a premium on their life