The current overweight of these money managers is 1.45% above the MSCI EM Index weight.

By
Sanam Mirchandani
, ET Bureau|
Updated: Oct 10, 2017, 08.40 AM IST
0Comments
India's popularity among overseas portfolio investors as one of the most preferred emerging markets has waned in recent times. The overweight position of emerging market funds on India has come down by a third since 2015 as expensive valuations and lack of earnings recovery dented confidence.

The current overweight of these money managers is 1.45 per cent above the MSCI Emerging Market Index weight. The overweight was 4.4 per cent in January 2015 -the highest ever level, showed data compiled by London-based Copley Fund Research, which collates and analyses data on global emerging market equity funds.

Copley Fund Research compiled this data from the average portfolio weightage of 126 global emerging market funds versus the MSCI EM index overweight. A fund is overweight when it has higher exposure to a particular country, stock or sector than its benchmark.

"Much of the increased India positioning was around the time of Modi's election, and around a hope that he could unlock the enormous potential of EM's second most populous nation. I'm not sure there has been enough concrete evidence of this occurring, so EM investors have rightly lost some confidence," said Steven Holden, founder, Copley Fund Research.

The percentage of the funds which are overweight India is 61.9 per cent currently compared to 83 per cent in December 2014, the data showed. A bulk of the drop in foreign funds' overweight position might have happened in the last couple of months. 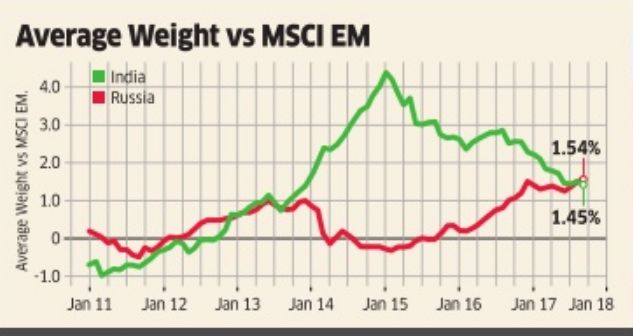 Since August 1, foreign investors have pulled Rs 26,450 crore out of Indian stocks. Still, these investors remain net buyers to the tune of almost Rs 32,000 crore in India.

India had been the top destination for these funds over the last few years, but the gap between expected and actual earnings growth has been only widening. Earnings downgrades have continued into this year as well with the Nifty's earnings per share estimate for the ongoing financial year coming down to about Rs 503 from Rs 540 at the beginning of April, according to Bloomberg data.

Russia is now the largest overweight for emerging market equity funds while India now occupies the second place, according to Copley. Many quality Russian companies appearing good at value and a num ber of Indian ones are looking expensive, said Holden.

Market participants were divided on whether India will be able to reclaim its crown of the biggest overweight within emerging markets.

"I do not think India will move to the top again. India's big reform efforts are behind us and the outlook is increasingly going to be dominated by politics," said Jan Dehn, London-based head of research at Ashmore Group.

Laijawala of Deutsche Equities said for India to come back to the top spot among emerging markets, one needs to see the return of double-digit earnings growth.

Others said the view on India from a long-term perspective has not changed. India is still the second-largest overweight so one shouldn't view the reduction in overweight as too bearish a sign, they said.

"The noise around slipping of macro fundamentals and lack of growth is bound to diffuse in some time. India has great long-term potential and there is tremendous investor comfort around Indian companies sustaining growth higher RoE for a longer period. While recent narrative has focused on some short-term trends, we are pretty confident that the secular story for India remains intact," said Arbind Maheswari, head of India equities sales trading, Bank of America Merrill Lynch.
Why You Invest the Way You Do: The Science Behind the Art of Investing
Read more on
India Inc
companies
india
Merrill Lynch
Positioning
equities
Place
Stocks
Benchmark
market

Why India is placing Su-30 fighter jets in South India

The forgotten founders of India

In India, commercial vehicles unlikely to do well in 2020: Timken India CMD