Receding concern over inflation, led by falling prices of pulses, has sparked expectations of a rate cut by RBI, causing bond yields to fall in the last few weeks.

Punjab National BankUnion Bank of IndiaOriental BankTaparia
EXPAND TO VIEW ALL
Mumbai: Public sector bank shares were among the biggest gainers on Wednesday as hopes of a rate cut in the monetary policy meeting in October triggered liquidation of bearish bets. The Nifty PSU Bank index was the top gainer among the Nifty sectoral indices, rising almost 3% on Wednesday.

Analysts said receding concern over inflation, led by falling prices of pulses, has sparked expectations of a rate cut by RBI on October 4, causing bond yields to fall in the last few weeks.

“The rally has more to do with the scheduled RBI poli cy meet and the expectation that there could be a rate cut,“ said Dharmesh Kant, head of retail research at Motilal Oswal Securities.“Bond yields have been falling, that means bond buying is happening and the expectation of a rate cut is much higher.“

Since the beginning of September, yields on benchmark bonds have dipped 19-20 basis points, pushing prices up. Bond yields and prices move in opposite direction. For banks, mainly public sector, a rally in the bond market helps boost treasury income because they are one of the biggest holders of government bonds.

“A combination of domestic and global factors are triggering rally in the bond market ahead of RBI monetary policy,“ said Piyush Wadhwa, head of trading at IDFC Bank.“Decent number of people are now factoring two rate cuts by RBI till March end.“

Moreover, cash in the banking system has turned surplus, a key catalyst to lower rates.

“Ahead of the RBI meeting, long build up has be seen in banking stock as well as Bank Nifty futures on the expectation of a rate cut,“ said Yogesh Radke, head of quantitative research at Edelweiss Securities.

“Rollovers in Bank Nifty is currently around 47-50%, lower than the last series and roll cost is in line at 0.40%,“ said Chandan Taparia, derivative analyst at Anand Rathi.“This indicates that participants are holding their positions and waiting for the next trigger. That's why they are carrying forward their positions in select banks.“

However, some analysts warn investors not to be swayed by the rally.

“Inherently banks remain very susceptible because they are over-owned by FIIs,“ said Sanjiv Bhasin, executive vice president, corporate affairs, IIFL. “Any unwinding or negative global cues will see banks leading the fall. Bonds being where they are, this would mean large treasury profits for PSU banks as they own large part of government paper. But it has largely been factored in." 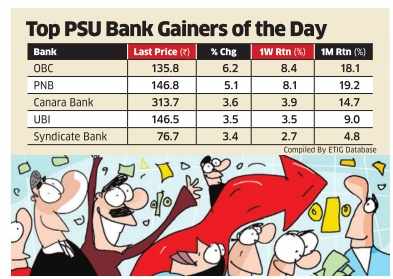 Why You Invest the Way You Do: The Science Behind the Art of Investing
Read more on
Inflation
in
Shares
monetary policy
Retail
Canara Bank
Edelweiss
Motilal Oswal
Bank of Baroda
benchmark

Bond yields rise, but market unperturbed by spike in inflation

Can quantitative easing work in India with 7% inflation?