Dalal Street not expecting an Octoberfest, but there's some reason to hope

MUMBAI: Will the recent weakness in the stock market extend to October? Few on Dalal Street can answer that with conviction but if one were to make a conclusion on the basis of past performances during the month, there is scope for optimism.

In the last 10 years, the Sensex has gained on six occasions in October, according to data compiled by the ET Intelligence Group .

Many analysts, however, are hesitant to conclude that the worst is over for the market with foreign investor outflow showing no signs of slowing amid concerns over slower-than-expected earnings growth and the impact of the Goods and Services Tax (GST) on businesses as well as the economy. 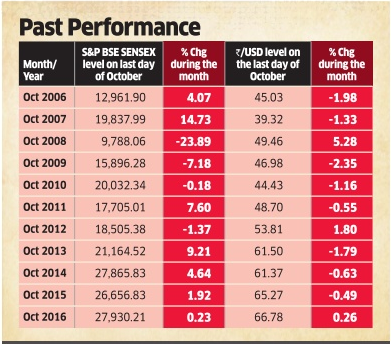 “This time, markets are more likely to fall in October as results are not expected to be good and as val uations are expensive,“ said Jyotivardhan Jaipuria, founder, Veda Investment Managers.

“October will be different (versus past trend) and we are likely to see 9,400 or below level on the Nifty. Now, reality is dawning with foreign investors selling and they are getting an exit because domestic funds are flush with liquidity. Domestic liquidity is the only saving grace for this market,“ said Sanjiv Bhasin, executive vicepresident, markets and corporate affairs, at IIFL.

Overseas, the US Federal Reserve has stressed on the need to continue gradual rate hikes despite broad uncertainty about the path of inflation. The Fed has set October to start shrinking its $4.5 trillion balance sheet. Geopolitical tensions surrounding North Korea also continue to remain a thorn in the flesh for markets.

Sanjeev Prasad, managing director at Kotak Institutional Equities said that investors like the long-term story but there will be limited change in sentiment so quickly .

Foreign investors have sold shares worth Rs 26,000 crore since August. Mutual funds have put in over Rs 29,000 crore during the period (till Thursday).

Brian Jacobsen, senior investment strategist on the multi-asset solutions team with Wells Fargo Asset Management said foreign investors have gotten a little scared of India for now as the Indian economy was hit by demonetisation and the roll out of GST. The recent runup in oil prices has also changed the outlook as India is a net importer of oil and that can be a further headwind to recovery , said Wisconsin-based Jacobsen.

“For a while, India was the fash ionable place to invest, but now it's lost a little of its appeal. The rupee will likely strengthen a bit more, but if the economy can prove to advance despite the recent setbacks and the headwinds of a stronger currency and higher oil prices, it can come back into fashion, but it might take a little bit of time,“ added Jacobsen.

The Indian unit has appreciated against the greenback in eight out of ten counts in the last 10 years during October. On Friday , the rupee closed at 65.28 to a dollar, up from Thursday's close of Rs 65.51 per dollar. The local currency had hit its lowest in six-and-a-half months earlier in the week. Anindya Banerjee, deputy vice-president, currency derivatives at Kotak Securities said September and October are usually volatile months for the rupee and that this October is likely to be no different. Banerjee said the movement in the rupee will depend on two factors. One would be whether the Reserve Bank of India succumbs to pressure and goes for a rate cut or hints at a rate cut in the next policy . The second factor is the global risk appetite.

“Sentiment indicators are throwing warning signs that the sentiment is becoming too bullish which means positions in risk assets could be getting crowded. With that kind of positioning if markets start getting disappointed with Trump's tax plan then we can see a risk off scenario,“ said Banerjee.

If specifics are announced in the Trump tax plan then the rupee can go to 66 per dollar, added Banerjee.He does not see rupee going below 64.5 during October.

Bhasin of IIFL said the rupee is likely to be range bound and that the weak bias will continue as the dollar is strengthening.

“65.75-66 level can't be ruled out,“ said Bhasin.
Why You Invest the Way You Do: The Science Behind the Art of Investing
Read more on
services tax
demonetisation
Balance Sheet
reserve bank of india
Stock Market
sensex
Liquidity
Inflation
Shares
Derivatives
Comments
Add Your Comments
Commenting feature is disabled in your country/region.