Nifty rollovers to the June series stood at 74 per cent, higher than the three-month average of 69 per cent.

Traders rolled over positions to the June derivatives series with a long bias and are now eyeing 9600-9650 for the Nifty. Nifty rollovers to the June series stood at 74 per cent, higher than the three-month average of 69 per cent with roll cost at 50 bps and market-wide rollovers at 76 per cent, in line with the average. Open interest in Nifty June futures is worth Rs 19,100 crore compared to Rs 19,500 crore on last series expiry day. Long rollovers were seen in select private banks and FMCG companies, but the pharma sector was the standout laggard. 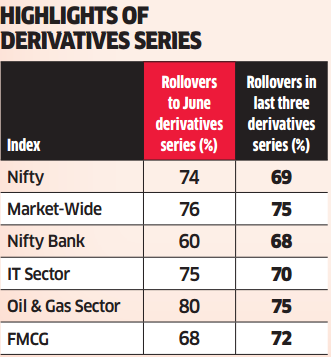 The May series was the worst for the pharma sector since November 2015 derivatives series. Nifty Pharma index tanked 9 per cent due to weaker-than-expected March quarter results from Lupin and Sun Pharma's arm Taro, and continued worries over pricing pressures in the US. "It is just the start of how bad it is going to be.

Just like IT, the industry will have to reinvent itself," said Andrew Holland, CEO of Avendus Capital-Alternate Strategies. Rollovers were strong in the auto sector with higher roll cost suggesting further gains in the June series, while PSU banks saw a fall in roll cost, indicating that their underperformance will continue.
Planning to invest in stocks? Now, shortlist scrips at the click of a mouse with ETMarkets Stock Screener.
Read more on
nifty
Lupin
Derivatives
Open Interest

How to play a range-bound Nifty