Nifty futures saw rollovers of 69% compared to average of 66% in last three expiries.

By
Sanam Mirchandani
, ET Bureau|
Updated: Sep 29, 2017, 08.57 AM IST
0Comments
Traders mostly carried forward bearish bets to the October series on expiry of the September contracts on Thursday as uncertainty about how long will foreign fund outflows continue kept the market on the edge.

Indian stock indices snapped their longest losing streak of this year amid expiry of the September derivatives series on Thursday .However, it was the second consecutive series where Nifty has weakened and also the worst for the index since November 2016. 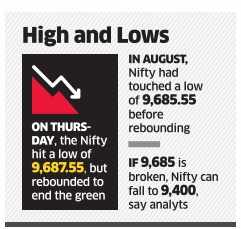 “In the last week of expiry there was heavy liquidation of long positions in both stocks and Nifty (futures). The premium of the Nifty October futures (to spot) is low, which shows that most of the positions rolled over have been on the short side,“ said Amit Gupta, head of derivatives at ICICIdirect.

Derivative analysts said the positions rolled over to Nifty October have been on the short side and that a short-term bounceback could happen led by short covering but indices are not likely to see a runaway rally back to record high levels again soon.

“We could see a bounce back in the short term but we might not see a new high. The resistance will be at 10,000 and 9,685, the low that was hit in August, will remain a support,“ said Rohit Srivastava, fund manager, Sharekhan.

Ashish Chaturmohta, head of derivatives and technicals at Sanctum Wealth Management said that a short term pull-back towards 9,900 levels is possible.

In the options segment for the month of October, the maximum open interest among Nifty put options is at 9,700 strike followed by the 9,500 strike while the highest open interest among call options is at the 10,000 strike followed by the 9,900 strike.
Why You Invest the Way You Do: The Science Behind the Art of Investing
Read more on
Derivatives
sensex
Bank Nifty
Stocks
wealth
market
real estate
Comments
Add Your Comments
Commenting feature is disabled in your country/region.