The Government has come out with a circular, which is raising more questions than it is trying to answer.

By
Pranbihanga Borpuzari
, ET Online|
Updated: Sep 29, 2017, 04.07 PM IST
0Comments
Much focus under GST has been given the goods, but the government has realised that the transition provisions are inadequate, especially for the service tax cases.

One such problem is how to report the service tax and take credit of the same that was payable during the pre-GST period, but paid during the GST regime. For the services under reverse charge made during June, the payment of service tax was technically due on July 6 and strictly speaking it could not be reported in the last service tax return period comprising April to June. This issue plagued all taxpayers.

Now the Government has come out with a circular, which is raising more questions than it is trying to answer.

As per the circular, the due date of filing the revised service tax return (which already expired for most people) has been extended to October 15 to facilitate reporting of such payment and taking credit in TRAN 1 (deadline is October 30).

“Interestingly, the circular says this is to help those who choose to wait till July 6, instead of paying by June 30. While as per the law there was no requirement to pay service tax by June 30. Further, it is not known whether the revision window would be open to all kind of reporting (besides service tax paid in July) or only reverse charge paid in July. Whether assesses who have already filed their revised return can re-revise their revised return is also not clear,” says KPMG, Partner, Priyajit Ghosh.

“The circular did not address a very common problem faced by the assessees, around reporting and taking credit of those service tax domestic invoices which were received beyond July. Further, there is no clarity around reporting of service tax payment which were made beyond July, mainly due to late availability of requisite information or omission. If GST would not have replaced service tax, such payment would have been reported during respective month of the service tax return. As window of service tax reporting has been only provided for April to June, taxpayers are facing difficulties,” says Ghosh.

Ghosh adds that many taxpayers would realise the need to revise their service tax reporting while finalizing their TRAN 1. “Hence, to ensure smooth transition and logical reporting, it must be clarified that all types of service tax payment can be reported by October 31 by way of final revision of service tax return and credit can be taken in the TRAN 1,” says Ghosh.

The circular also provides window of payment of service tax in cases where no registration was obtained. 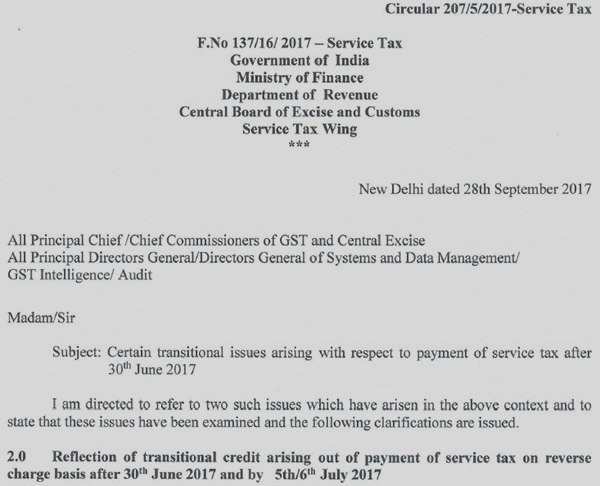 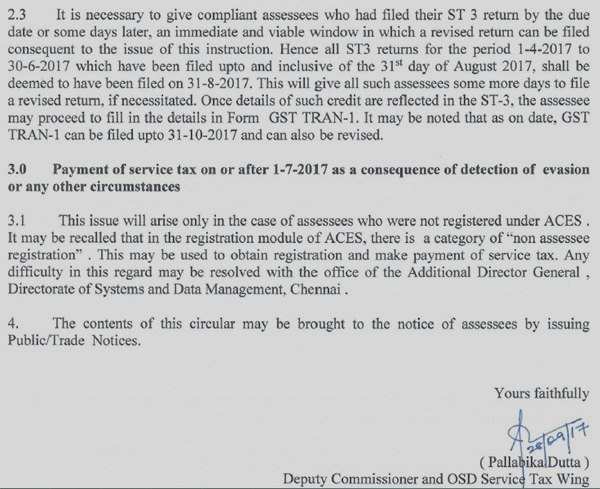 View: A fair assessment of Good and Services Tax

Taxmen to scrutinise mismatch between ITR and service tax returns

The Government is providing waiver on service tax, excise disputes. Should you go for it?