GST replaces more than a dozen levies with a new tax. That should help reduce the immense power India’s myriad middlemen wield at state borders.

ET Online|
Updated: Sep 29, 2017, 01.30 PM IST
0Comments
With the press of a button at midnight in Parliament’s Central Hall, India switched to GST, the single biggest tax reform undertaken by the country in 70 years of independence.

Launching GST, President Pranab Mukherjee said it is a momentous event for the nation. "This historic moment is the culmination of 14-year-long journey that began in December, 2002," he said.

Touting it as a gamechanger, PM Modi said GST will put India on path of a system that will be transparent, simple and keeps tabs on corruption.

"GST is the outcome of a thought process over several years," Modi said, thanking the GST council behind this landmark tax reform. "GST does not belong to one government, it is a collective effort."

The one national GST unifies the country's USD 2 trillion economy and 1.3 billion people into a common market, an exercise that took 17 tumultuous years.

Recalling Pandit Jawaharlal Nehru's tryst with destiny speech at Parliament's Central Hall, the PM said there could not be a better launchpad for GST to chart a new course for the country. "GST rollout is mark of cooperative federalism. This reform will show a new direction to nation building. This is a mark of Team India."

Modi said the GST will end India's multiplicity of taxes and the confusion, making India independent of the effect of cascading taxes. "It is Good and Simple tax."

GST replaces more than a dozen levies with a new goods and services tax. That should help reduce the immense power India’s myriad middlemen wield at state borders, free up internal trade, make it easier to do business and widen the country’s tiny tax base.

What it means for India:

1) It gives the country one uniform tax, and no frequent rate changes
2) A lower tax burden. One market to help businesses. No truck queues at state borders
3) GDP could rise by 2%
4) Less scope for evasion, which means higher revenues
5) Lower taxes to boost exports
6) Inspector raj will ease its grip

The concerns
1) Multiple tax slabs means lesser gains and disputes over classification
2) Multiple registration in different states
3) Confusion over how the tax will work out, as well as filing
4) Apprehension over existing stocks
5) Fears of anti-profiteering unleashing inspector raj

What it means for businesses
1) No fear that a state will randomly raise taxes
2) Transparency in taxes
3) Easy because only one tax to account for
4) Automated process means less babudom
5) Goods and services providers will get the benefit of input tax credit for the goods used, effectively making the real incidence of taxation lower than the headline taxation rate.

And most importantly, what it means for you 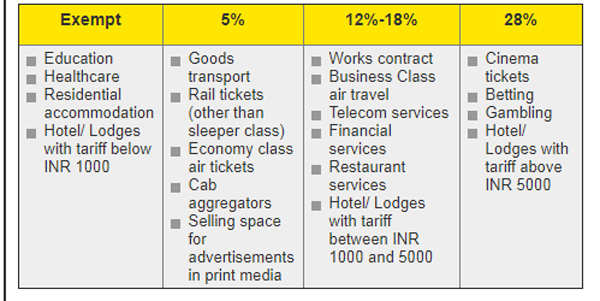 Only rates of select goods and services have been mentioned here