The letter made it clear that Akhilesh Yadav was not waiting for others to join the show and will start the campaign on his own.

By
Man Mohan Rai
, ET Bureau|
Last Updated: Oct 20, 2016, 12.44 AM IST
0Comments
LUCKNOW: The stage was set for another round of ‘family fight’ in the Samajwadi Party as chief minister Akhilesh Yadav announced his decision to begin his rath yatra two days before the date chosen by party chief Mulayam Singh Yadav for launching SP’s silver jubilee celebrations.

Akhilesh Yadav said that he intended to begin his poll campaign with the Samajwadi Rath Yatra across the state on November 3 — two days before the Samajwadi Party’s grand gala silver anniversary celebrations that will be presided over by his father Mulayam Singh begins — making it evident that the feud in the party and Yadav clan was far from over.

In a letter to Mulayam Singh on Wednesday evening, a copy of which was marked to his uncle and state SP chief Shivpal Yadav, Akhilesh said: “In view of the upcoming assembly polls, I had planned to start campaigning by taking out a Samajwadi Rath Yatra, which was postponed due to some reasons... All parties have started campaigning and in order to enable the SP to form the next government, I have decided to start campaigning from November 3.”

The letter made it clear that Akhilesh Yadav was not waiting for others to join the show and will start the campaign on his own.

His youth wing supporters had in a letter on Tuesday stated that they would not take part in the silver jubilee celebrations, to be held in Lucknow. With Akhilesh starting his yatra it looks unlikely that he would attend the function.

Akhilesh Yadav’s missive came hours after he held a closed-door meeting with Mulayam and Shivpal at Mulayam’s residence. According to party sources, Akhilesh stuck to his demand for revoking expulsion of youth leaders and having a say in ticket distribution at the meeting.

A few days ago, Mulayam had embarrassed Akhilesh when he asserted that the latter was not the CM face in the poll campaign and that the CM would be decided by the newly-elected MLAs.

Akhilesh’s latest move, in this context, is seen as his attempt to send a strong signal to the older generation in the party, represented by Mulayam, Shivpal and Amar Singh, that he has not given up the turf war within the party and family.

The next date to watch out is October 24, when a highlevel meeting of the party called by Mulayam will take place. All MLAs, MPs and former legislators have been invited for Monday’s meeting. 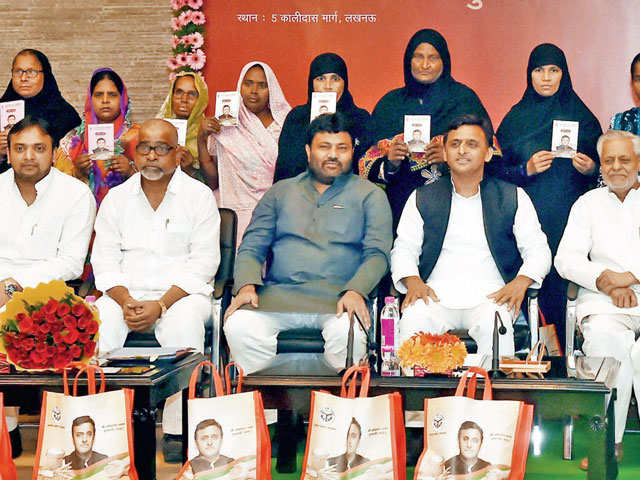 Why people in Mainpuri are hooked on Mulayam Singh Yadav