The agency is making their case as iron-clad as possible to push for the strictest possible punishment as the victims were raped multiple times.

The agency is making their case as iron-clad as possible to push for the strictest possible punishment as the victims were raped multiple times and because the guru had misused the faith that the sadhvis had reposed in him. Top sources, privy to the developments, told ET that the rape charges merit the strictest possible punishment. “It is different from a normal case where a victim has been ravished once.

Because, in the instant case, the victims were violated multiple times,” said a senior official requesting anonymity. The CBI had said that the Dera chief had raped two of his female followers repeatedly on different occasions in the Dera.

The official quoted above added: “Add to it the inter-se relationship between the offender and the victim. It was that of faith. Here, the guilty –– Ram Rahim –– not only abused the spiritual authority he enjoyed over his female followers, but he also made gross misuse of the faith the sadhvis had restored in him, whom they treated as their Guru”. 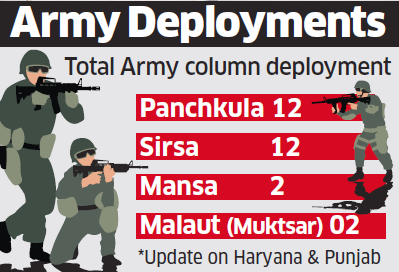 The gravity of the offence is further compounded by the fact that two of his followers were raped by the self-styled Godman repeatedly whenever he desired. The special CBI Judge will pronounce the quantum of sentence in Rohtak Jail where Ram Rahim is currently lodged. Legal eagles at CBI are also weighing all “excuses” the Dera chief’s defence could possibly raise besides seeking minimum sentence –– seven years in the current case.

A day before the verdict, the Dera chief had tweeted that he had decided to come to court “despite his backache”. Although he claimed to have a backache, Ram Rahim chose to travel to Panchkula from his Dera in Sirsa by road –– a journey of nearly five hours –– rather than to be flown in a chopper. “It is expected that Ram Rahim’s lawyer may demand his shifting to a hospital on medical ground or demand special treatment keeping in account his huge following,” said another senior official on the condition of anonymity. He added that “all kind of tactics will be used (by the defence) to demand leeway from the court”.

CONSECUTIVE OR CONCURRENT?
As per the Indian Penal Code, the minimum sentence for rape, under Section 376 is seven years and the maximum is life imprisonment. As per the rulebook, the court has the power to award sentence to be undergone “consecutively” than concurrently. In this case, Ram Rahim stands convicted of raping two victims.

“In normal cases, a convict is to undergo a sentence concurrently even if he stands convicted of two or more than two charges. But courts are well within their legal right to award consecutive sentence. Which means that the convict will have to complete the first sentence and then undergo the second sentence,” said a senior government legal expert.

However, going by the rulebook, the defence counsel can appeal the CBI Court order in the Punjab and Haryana High Court and seek bail. It is only if the High Court finds force in the appeal and prima facie finds infirmities in the lower Court ruling will the convict be released on bail and his sentence suspended. Once the appeal is decided, Supreme Court remains the last forum for either of the aggrieved parties who wish to contest HC order.
Read more on
Ram Rahim
CBI
Rape charges
life imprisonment
Dera chief
Rohtak Jail
sadhvis

Their chief Ram Rahim in jail, Dera followers yet to decide who to vote for

Gurmeet Ram Rahim Singh parole issue: Sirsa Police yet to give its report to DC