The election commissioners want to formulate a model code in consultation with media houses, political parties and other stakeholders.

By
Ritika Chopra
, ET Bureau|
Last Updated: Jul 23, 2015, 08.27 AM IST|Original: Jul 23, 2015, 08.27 AM IST
0Comments
NEW DELHI: The Election Commission of India is keen on drafting a model code of conduct for the media to ensure some norms are adhered to during coverage of elections, a proposal which if implemented will mark the first formal code of its kind in the country.

Election commissioners Nasim Zaidi and Achal Kumar Joti, in a meeting held on June 16, decided that the poll panel should “attempt” formulating a model code of conduct for the media, people with knowledge of the matter said.

At present a code of conduct is in place only for the political parties and election candidates. Evolved with consensus among political parties, the code comprises of a set of norms on how candidates and parties should conduct themselves during poll season. It comes into force immediately on announcement of the election dates by the commission. 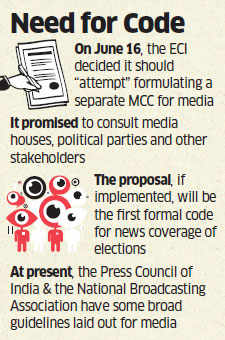 “At present, the Press Council of India and the National Broadcasting Association have some broad guidelines laid out for print and electronic media. Most media complaints that come to us during elections are usually forwarded to these bodies. Till date there hasn’t been any code from our side and this, if successful, will be a first,” said an election commission official, who did not wish to be identified.

The official further said, “The media has helped the EC tremendously in increasing voter awareness. Our intention isn’t to have them on a leash. We are going to consult media houses and evolve a code of conduct only with consensus.”

The poll panel’s decision assumes significance against the backdrop of serious media violations reported during the Lok Sabha elections in 2014. The commission was upset, for instance, when news channels aired the release of BJP manifesto across the country even as the first phase of elections was going on in the North-eastern states.

The commission, then headed by VS Sampath, was also unhappy when media channels aired the footage of prime ministerial nominee Narendra Modi flashing the BJP election symbol right after filing his nomination from Vadodara.

No state-specific schemes to be announced in Budget: Election Commission