Five-phase Bihar assembly elections to be held in Oct-Nov: Sources

Assembly elections in Bihar are likely to be held in October-November over five phases, as opposed to six phases in 2010.

Contrary to the initial buzz that Bihar elections could start in September, officials said that the poll panel is not keen on this month as part of the state are prone to flooding during this period. The term of Bihar assembly ends on November 29.

The two election commissioners, Nasim Zaidi and Achal Kumar Jyoti, will zero in on the final dates once they are back from their state visit in the first week of August. 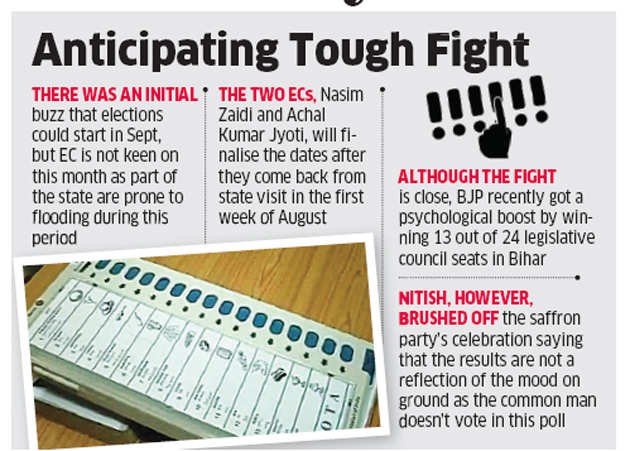 The Bihar elections are a crucial political test for the BJP, which is locked in a close fight with the Nitish Kumar-Lalu Yadav alliance. The ruling party at the Centre desperately needs an electoral win to regain the momentum lost after it humiliating defeat in Delhi elections early this year.

Although the fight is close, the saffron party recently got a psychological boost by winning 13 out of 24 legislative council seats in the state. Chief Minister Nitish Kumar, however, has brushed off the saffron party's celebration on the ground that the Legislative Council results are not a reflection of the mood on ground as the common man doesn't vote in this poll.

Anticipating a tough political fight in the state, the EC had started poll preparations in Bihar unusually early this year. "On April 22 we started our work for Bihar elections. Our teams had already made one visit to the state by May. We want to keep a close watch on the use of money in this election," said an EC official, who did not wish to be identified.

Another EC team left for Bihar on a second visit on Wednesday to review preparations. "The final electoral rolls will be published on July 31 and that will be followed by the Commission’s visit to the state in the first week of August," added the EC official.
Read more on
Election Commission
Nitish Kumar
Nasim Zaidi
Bihar polls
Achal Kumar Jyoti
Comments
Add Your Comments
Commenting feature is disabled in your country/region.