Journey to the top: Made mark as youth leader, 'steely' Stalin never fails to take along elders

Stalin never broke a tear, or complained about it. He took it in silence, said Dawood Miakhan, the grandson of political leader Quaid-E-Milleth.

By
Bharani Vaitheesvaran
, ET Bureau|
Last Updated: Jan 06, 2017, 11.59 AM IST|Original: Jan 06, 2017, 12.12 AM IST
0Comments
CHENNAI: It was the mid-1960s. The DMK under CN Annadurai and his galaxy of orators was whipping up a fiery cocktail of passions against the Congress-led government’s imposition of Hindi. Language politics was on everyone’s lips. In this political milieu was a puny child with wiry hair getting rapped in the knuckles too often at the Madras Christian College school in Chetpet, apparently for no rhyme or reason.

It was MK Stalin. “Who is he? Why is he getting targeted?,” Dawood Miakhan, the grandson of political leader Quaid-E-Milleth and a classmate who later became a friend of Stalin, had asked friends in class. In a whisper that showed the notoriety the DMK had gained in a pro-Congress regime at the school, he was told: “M Karunanidhi’s son.”

“Stalin never broke a tear, or complained about it. He took it in silence,” Miakhan told ET.

“I wouldn’t say he was a brilliant student. But, he had a trait to not crumble under pressure.”

Stalin did break a tear, though. On Tuesday, leader Durai Murugan parlayed a line by Annadurai to create a historic recurrence to Stalin’s elevation as the party’s working president: “In the meeting of 1956, Anna invited ‘Navalar’ Nedunchezhian to take over. I shall borrow that line from Anna and say: ‘Thambi Vaa.. Thalamai Thaanga Vaa… Un aanaikku Kattupattu Nirpom.. Idhu Sathiyam (Come Brother... Take over the leadership.. We pledge to bow to your orders ).”

“When I was elevated from one post to another, I felt very happy. But, at this juncture, I take up this post with a heavy heart,” he told a cheering crowd. Stalin’s journey through varied posts at the DMK to reach the cusp of total power has been painstakingly slow for a party often accused of dynasty politics.

Clearly not as gifted as his father to influence public sentiment with words or political jockeying, Stalin had been a grassroots man, often travelling into the state’s hinterland to meet with cadre. “It was in the early eighties when he was heading the youth wing,” said leader TKS Elangovan. “His commitment to groundwork was total. Periodically, he would hold meetings with his cadre to keep propagating the key issues DMK stands for.”

Tiruchi Siva, a Rajya Sabha MP and an aide of Stalin since his youth wing days, said Stalin’s moment of arrival in politics was in end-1982 in Vellore. Stalin had deployed cadre on back-breaking ground work for a public meeting. The target was to gather crowds in large numbers. 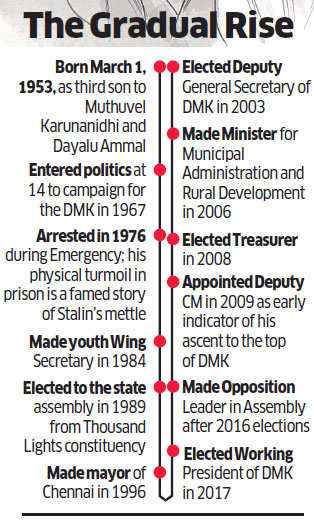 “It was a meeting that had no stalwarts from the DMK, no big leaders. It was completely about the youth and one had to see the numbers to believe it. I believe Stalin emerged as a leader at that meeting. His success, I think, was to take the idea of DMK into successive generations. I gave him the monicker Thalapathy (The General) at that meeting, though Stalin did not accept it, then,” he said.

Cut to the present, Stalin still holds strains of that character he had developed as a child. In the face of opposition, sometimes within the party, Stalin is judicious in returning the fire. Elangovan said Stalin has made it his second nature to consult with the party elders. “His first reaction, ever, to criticism is: ‘ignore.’”

Stalin was targeted by his own brother MK Alagiri, a Madurai-based politician with a penchant for strong-arm politics. Removed from the party for indiscipline, Alagiri had often spoken out against the “coup” in the DMK in Chennai and taking it over from his father.

With Stalin finding himself with unfettered power, the arena ahead holds a new sort of a challenge for Stalin. His Namukku Naame (We, for ourselves) campaign helped the DMK get back as the opposition party but stopped short of winning the polls. Observers believe the accusation of corruption that stemmed from DMK and made news has left a scar. Allegations of land grabbing also abound.

“Stalin , as a leader in touch with the younger generations, should begin communicating to the people that the DMK would be a newer, better party under his leadership. Only this will help the DMK climb back to power,” said political commentator Gnani Sankaran.
Read more on
tamil nadu
Karunanidhi
DMK
Stalin

"No to CAA, NRC" rangoli at DMK chief Stalin's residence

Stalin warns party members of action if banners put up