When it comes to defections by members of legislative assemblies, Arunachal Pradesh and Uttarakhand have dominated headlines. The MLAs of the ruling party — the Congress in both states

By
G Seetharaman
,
CR Sukumar
, ET Bureau|
Updated: Apr 03, 2016, 04.23 AM IST
0Comments
When it comes to defections by members of legislative assemblies, Arunachal Pradesh and Uttarakhand have dominated headlines. The MLAs of the ruling party — the Congress in both states — broke ranks and backed the chief opposition party, the Bharatiya Janata Party (BJP), putting the future of the state governments in jeopardy.

This has led many to question the efficacy of the anti-defection law. Intensifying the debate over the law are the defections by opposition MLAs to the ruling parties in Telangana — which was carved out of the erstwhile Andhra Pradesh less than two years ago — and more recently, in Andhra Pradesh itself.

The Telangana Rashtra Samithi (TRS) won 63 out of the 119 seats in the 2014 assembly election. But its strength in the present assembly is 83, including 12 legislators who have defected from the Telugu Desam Party (TDP) and four from the Congress. This has left TDP with all of three MLAs in Telangana.

The TDP, however, is a beneficiary of defections in Andhra Pradesh, where eight MLAs from YS Jagan Mohan Reddy’s Yuvajana Shramika Rythu Congress Party (YSRCP) joined it in over a month and three more are expected to follow suit. (See chart.)

Engineering Defections J Musaliah, a professor of political science at Osmania University, says a common reason for the defections in both states could be the opposition MLAs’ belief that the ruling parties are likely to get another five-year term in the 2019 polls.

A TDP legislator in Telangana, who defected to TRS after a year of resisting its lures, says he was helpless. “Apart from freezing developmental projects in my constituency, the TRS brass also targeted my businesses,” he says, pleading anonymity.

“I had to join the ruling party as my political career was at stake and TDP leaders weren’t coming to my rescue.” One of the problems for the TDP and the YSRCP — which has lost two of its three MLAs to the TRS — in Telangana is that they are seen as Andhra parties that were opposed to the creation of Telangana.

Moreover, Musaliah believes that K Chandrashekar Rao, TRS president and Telangana chief minister, has managed — despite being an upper-caste Velama — to garner the support of different caste groups, including Reddys, other backward classes and scheduled castes.

The Reddys, who are dominant in Telangana and the Rayalaseema region of Andhra, had the most to lose from the bifurcation of Andhra Pradesh. Ten out of the 16 chief ministers of Andhra Pradesh have been Reddys, who accounted for just 8% of the undivided state’s population, according to some estimates. The Reddys traditionally backed the Congress, but that changed after the death of former CM and Jagan’s father, YS Rajasekhara Reddy, in a chopper crash in 2009. When Jagan, angry at not being made CM, floated the YSRCP, he took away some of the Reddy votes, but he has not been able to sustain them. Three of the eight YSRCP MLAs, one member of the legislative council (MLC) and one MP who have defected to the TDP are Reddys. 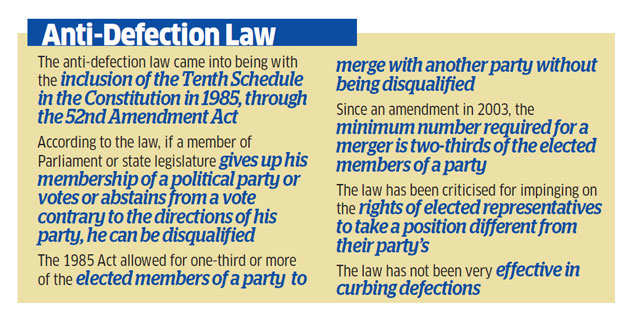 “He is headstrong and, unlike his father, does not consult with senior leaders before taking decisions. That has not gone down well with them,” says Musaliah. Jyothula Nehru, an MLA of YSR Congress in Andhra, blames Jagan’s autocratic behaviour for his decision to leave the party this week. “YSR Congress has failed to play the role of a constructive opposition,” he says.

Another apprehension of the YSRCP legislators is Jagan’s legal battle. Jagan is under investigation for investments in his businesses by companies which allegedly benefited during his father’s regime; and he has spent 16 months in jail for it.

The defections could bolster Andhra CM and TDP leader Chandrababu Naidu, who is looking to earn the support of Reddys and Kapus, a heterogenous group. Naidu is a Kamma, a forward caste dominant in coastal Andhra. “Chandrababu Naidu is resorting to unfair and undemocratic practices of luring opposition party lawmakers with huge packages and is engineering defections,” says Jagan. 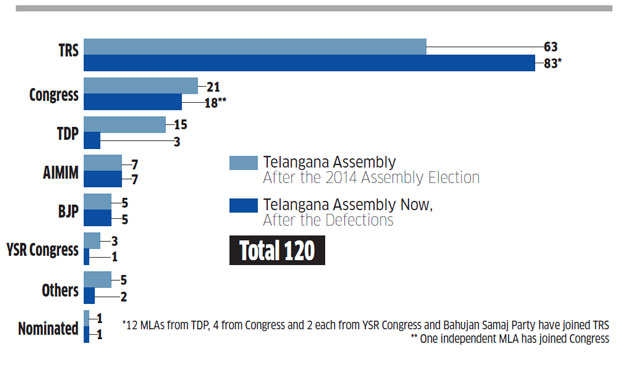 Disqualifying the Defectors Interestingly, the anti-defection law has not helped the affected parties. The antidefection law of 1985 initially allowed for one-third or more of the elected members of a party to merge with another party.

But since an amendment in 2003, the minimum number required for a merger is two-thirds of the elected members. This is why the TDP and the YSRCP want their defectors to be disqualified in Telangana and Andhra assemblies respectively, but the speakers have not acted on it. A Revanth Reddy, TDP working president and floor leader in Telangana, accuses the speaker of being biased towards the ruling party and vows to continue a legal battle to disqualify the defectors.

“The place where laws are made is lawless now,” says lawyer Ravi Shankar Jandhyala, about Andhra and Telangana assemblies. 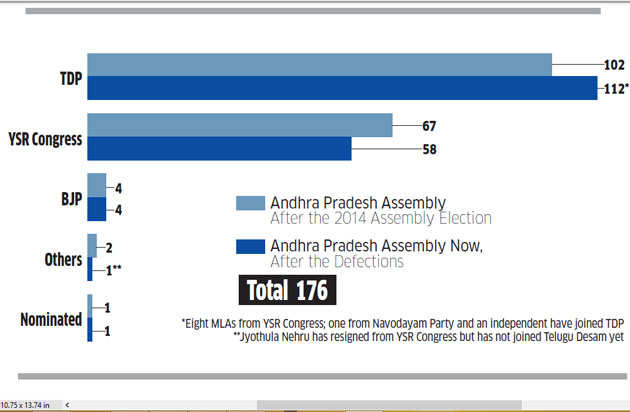 He is representing opposition parties in a case in the Supreme Court relating to defections in Telangana. He says the Election Commission or the judiciary should decide on matters of defections. MR Madhavan, president of PRS Legislative Research, says while the law prevents legislators from expressing their points of view, it has not been successful in preventing defections.

Unless the defectors in the two Teluguspeaking states are disqualified, the opposition is bound to become weaker, with more MLAs crossing over to ruling parties, making a mockery of the voters who sent them there.
Read more on
Madhavan
Ravi Shankar
investments
Andhra Pradesh
Uttarakhand
Arunachal Pradesh
Sunday ET
Comments
Add Your Comments
Commenting feature is disabled in your country/region.