"We are going to initiate efforts to bring in a new chief minister with the help of our supporting MLAs, said Dhinakaran's supporter and Andipatti MLA Thanga Tamil Selvan.

By
V Prem Shanker
,
Bharani Vaitheesvaran
, ET Bureau|
Updated: Aug 23, 2017, 01.08 AM IST
0Comments
CHENNAI: Tamil Nadu’s ruling AIADMK is back to number crunching and keeping its flock together as at least 19 legislators belonging to the TTV Dhinakaran camp submitted letters to the governor on Tuesday stating that they have no confidence in the chief minister, Edappadi K Palaniswami.

At least a dozen MLAs — in an episode reminiscent of what took place in February this year –– were taken to a resort in neighbouring Puducherry. “More are coming. I cannot say if that will happen tonight or tomorrow,” said P Vetrivel, a Dhinakaran loyalist.

Even as the rebel MLAs began gathering at the resort, calls for speaker P Dhanapal to be sworn in as chief minister emerged from various quarters, including from V Dhivaharan, brother of VK Sasikala.

CR Saraswati, a spokesperson for Dhinakaran’s camp, told ET the move to withdraw support was necessary “to ensure that the current chief minister is removed and a new chief minister, who can work keeping in mind the party’s unity and taking every party worker along, is reinstated.” 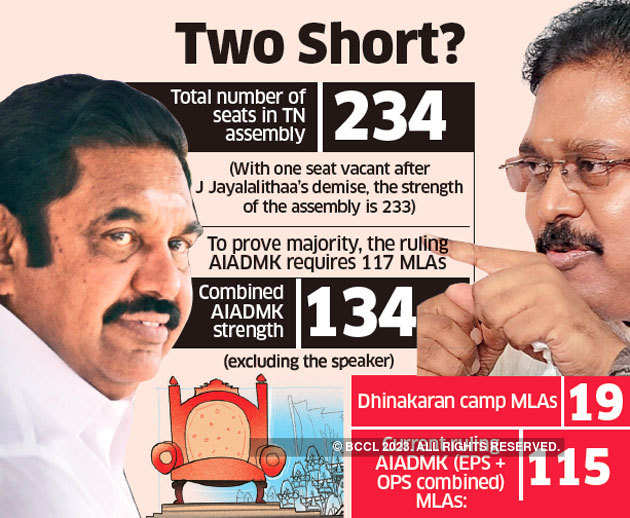 In his letter, Stalin mentioned that 22 legislators had withdrawn their support to Palaniswami. The legislators withdrawing support to Palaniswami pointed out to a precedent in the Balachandra Jarkiholi and others versus BS Yeddyurappa case, in which the Supreme Court reversed the disqualification of dissenting legislators in the Yeddyurappa government. Back in 2010, MLAs in the Yeddyurappa-led government wrote the Governor H R Bharadwaj expressing their “disillusionment” with the government, much similar to the circumstance in Tamil Nadu now.

The governor had asked the chief minister to prove majority on the floor of the house.

The chief minister responded with an application seeking disqualification of 11 MLAs, for which the Speaker disqualified the MLAs and the state high court upheld the move by the Speaker.

Amid these developments, Palaniswami and Panneerselvam went into a huddle at the secretariat to discuss the way forward.

Leader in the Panneerselvam-Palaniswami combine C Ponnaiyyan, said: “They may speak many things but I don’t believe they have intentions to topple the government.”