The new fund, which is targeting a final close by the end of the year, will take the total assets under management of the Bengaluru-based investment firm to more than $1billion, two people familiar with the matter said.

By
Madhav Chanchani
, ET Bureau|
Updated: Mar 31, 2017, 08.23 AM IST
0Comments
NEW DELHI: Private equity firm Ascent Capital, an early investor in online grocery retailer BigBasket, is planning to raise a new fund of about Rs 2,275-2,600 crore ($350-400 million) after scoring half a dozen exits since last year. The new fund, which is targeting a final close by the end of the year, will take the total assets under management of the Bengaluru-based investment firm to more than $1billion, two people familiar with the matter said.

While Ascent Capital has already started raising the fund and has been in a soft marketing mode since last year, a more active push came after it made an over threefold return on investment while exiting multi-speciality hospital chain Kerala Institute of Medical Sciences (KIMS). 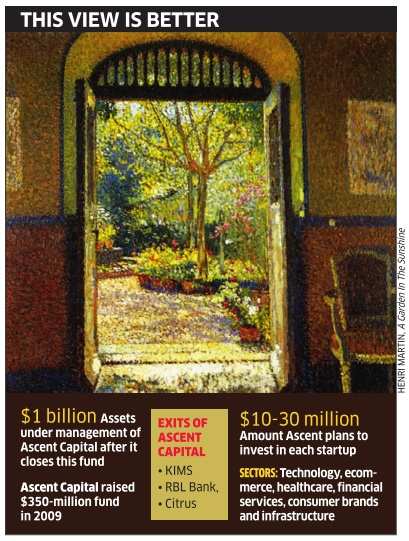 Earlier this week, True North invested $200 million in KIMS for a controlling stake, in one of the largest private equity investments in the healthcare space.

The transaction also included acquisition of the stake held by Ascent Capital, which first invested in KIMS in late 2011 and infused capital in multiple tranches.

Ascent also exited from RBL Bank, which went for an IPO last year, besides payments company Citrus, which was acquired by PayU for $130 million. It is now counting on this track record to successfully close the new fund. When contacted, Ascent Capital CEO Raja Kumar confirmed the exit and the plans for a new fund, but declined to comment on the specifics.

The new fund for Ascent Capital, which was earlier known as UTI Ventures, comes about eight years after it raised the previous fund of $350 million in 2009.

It will also be its first fund after it completely bought out the stake held by UTI Asset Management Company (UTI AMC), which was one of the top mutual fund managers in the country , owned by public sector financial insti tutions like State Bank of India and Life Insurance Cor poration of India.

Founded in 2001 as UTI Ventures, the firm's management team led by Kumar started the spin-off process in 2009 by rebranding it as Ascent Capital.