By
Gulveen Aulakh
, ET Bureau|
Last Updated: Apr 11, 2017, 09.35 AM IST|Original: Apr 11, 2017, 01.14 AM IST
0Comments
NEW DELHI: Smartphone makers in India had one big positive last year, when they were hit by slowing sales. The average sale price of these devices, crucial to their revenue and profitability, rose for the first time in four years in 2016 – going up by 3 per cent – and is expected to increase this year as well.

The unexpected change in trend reflects a shift in consumer buying in an acutely price sensitive market, indicating that more smartphone users are now willing to spend more on higher-priced products from Apple and Samsung Electronics and mid-segment priced phones launched by Chinese companies, industry executives and analysts said.

With volume growth in 2017 expected to be little changed or marginally higher, companies are trying to focus on driving value from the same volumes. This means revamping their portfolio to offer higher-value models in the hope of pushing up margins and profitability.

"With thinning margins on lower-priced smartphones, brands focused on models that were priced higher, specifically in the Rs.10,000- Rs.20,000 price band, while ecommerce platforms like Flipkart and Amazon also focused on brands in the mid-segment to chase profitability," said Tarun Pathak, associate director at Hong Kongbased Counterpoint Technology Market Research.

"Even though 75 per cent of the sales are under $150, the sweet spot for consumer purchase changed from $75 to $100, which led to the increase in the average sale price (ASP)." According to Counterpoint, ASP of smartphones in India rose by 3 per cent to $122 on-year after declining every year since 2013. International Data Corporation pegged the ASP at $135 in 2016, up 2.3 per cent.

Still, ASPs in India are among the lowest among major markets, at about half the level of China’s $258 and a third of $410 in the US, IDC added. Shubhajit Sen, chief marketing officer at Indian Smartphone maker Micromax Informatics, said that new companies concentrated on launching devices in the mid-premium segment (Rs.10,000- Rs.20,000), leading to a high double-digit growth in this category.

The company launched Rs.24,999-priced Dual5 last month as a precursor to a wider, higher-priced portfolio this year. Rival Indian company Lava ventured into this price bracket last month with its Z series, aiming at generating higher revenue from this segment.

Oppo, along with Chinese companies Vivo, Lenovo, Xiaomi and Gionee, has been driving up volumes in the midpremium segment by aggressively launching models, making it the fastest-growing price band in the market. 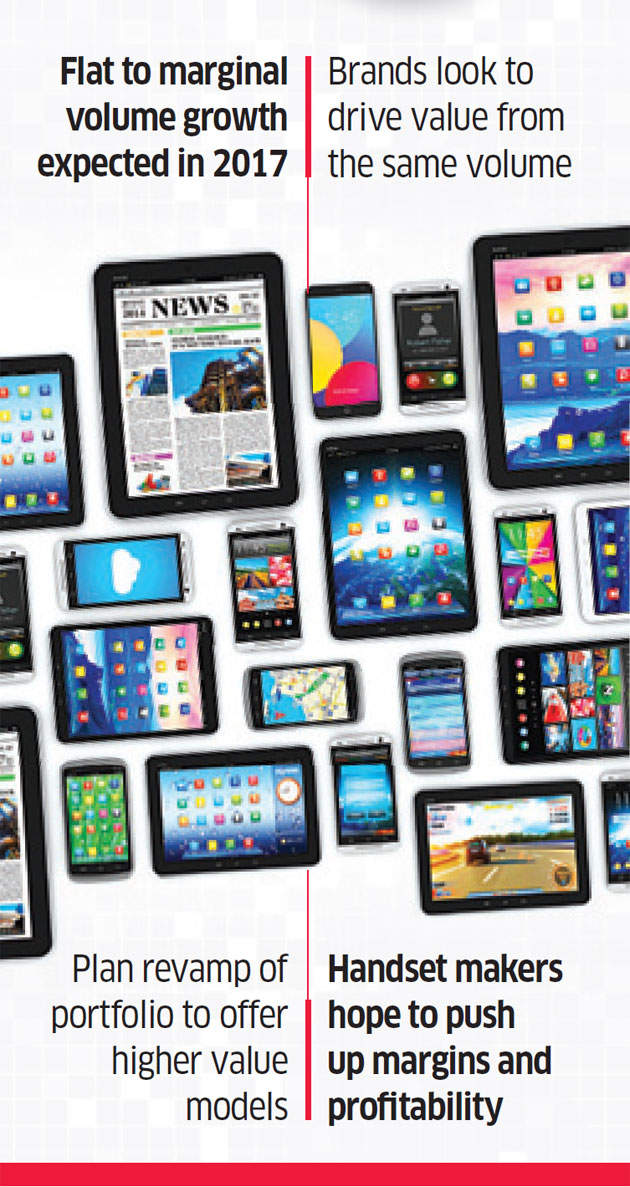 "Even though most Indian consumers are still very price sensitive, there is a growing section of the new-age buyers who are willing to pay more for the premium quality for their Smartphone," said Sky Li, president of Oppo India, adding that he expected the ASP to rise in 2017 as this buying sentiment continues.
Read more on
India
Samsung
Apple
Smartphone
sale
Consumer

Watch out for smartphone multipliers