Experts say the latest bundling tie-ups could work as it’s a win-win for all the parties — handset players, telcos, and of course, customers.

By
Gulveen Aulakh
,
Danish Khan
, ET Bureau|
Updated: Jul 08, 2017, 12.54 AM IST
0Comments
NEW DELHI: Handsets bundled with telecom services are back in India, albeit in a different avatar from the Reliance Infocomm’s Monsoon Hungama of 2003! Back then, the carrier was subsidising the devices.

This time around, it’s the other way around. And experts say the latest bundling tie-ups could work as it’s a win-win for all the parties — handset players, telcos, and of course, customers. Under the new version of bundling, handset brands and carriers have been teaming up to offer free voice and low-cost data for, say a year, on purchase of a particular smartphone.

For instance, recently, Micromax launched its Canvas 2 smartphone with a year-long offer of 1GB a day free data and 600 minutes of off-net calls, or calls to other networks, from Airtel. Also, Vodafone India is offering free data to the buyers of Nokia 3, Nokia 5 and Nokia 6. Jio too has tied up with several handset makers since its launch. The handset makers foot the bill for customers' usage as part of a confidential commercial agreement. 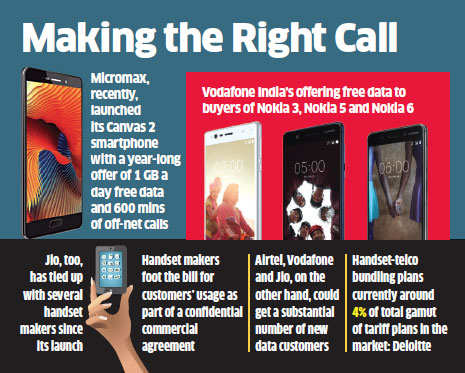 Airtel, Vodafone and Jio, on the other hand, could get a substantial number of new data customers. Consultancy firm Deloitte said the share of handset-telco bundling plans are currently at around 4% of the total gamut of tariff plans in the market, which was next to nothing in the past few years.

This is expected to rise to 6-7% over the next year or so as top telcos try to retain existing and bring in new customers in the wake of intense competition from Reliance Jio, which itself is tying up with handset players. Deloitte’s Hemant Joshi said that earlier bundled plans (in which user gets free data with SIM and handset purchase) used to give 1 GB or 2 GB, which has moved to 10 GB due to fall in data tariffs.

“Bundling moved from voice or minute-based to data or bytebased. With mobile data traffic rising by 76% year-on-year in 2016 driven by growing uptake of 3G/4G services, telecom operators also adopted data driven bundle model to increase data usage,” said EY’s partner Prashant Singhal. In developed markets such as the US, contract-based carrier model is more prevalent where telcos there charge consumers a monthly rental, say for instance $50-60, for a post-paid plan for two years, and the handset seller or brand -- which is bundled with the plan -- is nowhere in the picture.

The Indian market has been completely reverse, where the handset is sold independently of the tariff plan for multiple reasons. Unlike in the US, India’s a prepaid market with low average revenue per user (ARPUs) and low penetration of credit cards, which makes implementation of a contract plan near impossible. In the recent past, players such as Reliance Communications and Vodafone India tried the US model with the iPhone 6 models, but the high cost outgo for the consumer -- 30% more than the cost price of the phone -- meant that the plans did not fly. “The tariffs are so low and competition so high that telcos cannot take an additional cost of selling phones on themselves,” said IDC India’s senior analyst Navkendar Singh.

The new model of bundling, however, enables the telecom operators to drive data adoption and increase customer stickiness, said EY’s Singhal, views that were endorsed by other analysts. “I see this trend to pick pace going ahead,” said Counterpoint Research’s associate director Tarun Pathak, who added that the bundled plans can be recurring revenue for vendors and telcos, which is rather critical given the competition by Jio since September. Deloitte’s Joshi said that bundled plans help in reducing churn as customers get both data and voice at an attractive price. Micromax's chief commercial officer Shubhodip Pal said that data is one of the significant factors affecting the buying decision of users as the focus of consumers has shifted from just the hardware to the overall connected experience.

“The market is going into a direction where optimized experience matters more than standalone hardware specification... besides benefits of cost of acquisition from consumer perspective, it is also a seamless service experience which can be enabled,” said Karbonn Mobiles’ executive director Sashin Devsare. Further, telcos are increasingly partnering with ecommerce portals to provide data bundle offers on purchase of smartphones, given the significant increase of handset vendors on ecommerce portals.

“Partnerships with handset vendors is an area we continue to invest in and believe that such ventures are in the customers’ favour,” Idea spokesperson said, adding that new initiatives are being planned for the coming quarters. Further, bundling data will also help reduce the cost of ownership for the end customer, thereby making the 4G device purchase even more relevant and as a result, leading to increased 4G penetration, and higher ARPU for telcos. IDC’s Singh reckons that such offers cannot work over a longer period of time in the Indian market as more than 95% of the Indian market comprises prepaid connections that recharge for voice and data plans separately, as per use, which is also reflective in the low ARPU of under.`200 a month.
Read more on
India
telecom services
handsets
Reliance Infocomm
Monsoon Hungama
Comments
Add Your Comments
Commenting feature is disabled in your country/region.