ICA has also demanded continuation of the current duty structure for mobile phones and tablets for promoting and sustaining local manufacturing in India.

ICA has also demanded continuation of the current duty structure for mobile phones and tablets for promoting and sustaining local manufacturing in India, the world’s second largest market by active smartphone users.

“As mobile phone production is rising, the present differential duty dispensation is adequate to attract further investments,” the association said in its presentation to the government. It added that the differential duty should be kept in place even after transition to the Goods and Services Tax regime.

After the government made imports expensive by 11%, players like Foxconn, Sony, Lava, Micromax, Intex and others took to phone production at home which rose to nearly 100 million units in 2015, employing over 17,000. The quantum of production is set to double by March 2016, while employment will go up by over 60%, ICA added. 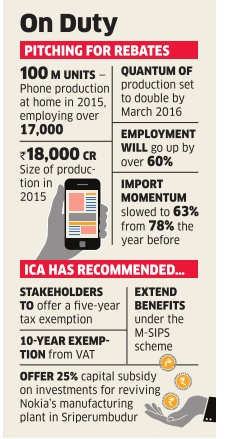 By value, production rose 95% on-year to Rs 18,000 crore in 2015, while import momentum slowed to 63% from 78% the year before.
ICA has recommended stakeholders including Tamil Nadu government and central departments of revenue, commerce and information technology to offer a five-year tax exemption, extend benefits under the M-SIPS scheme, 10-year exemption from VAT and even offer 25% capital subsidy on investments for reviving Nokia’s manufacturing plant in Sriperumbudur, such that it becomes an attractive purchase for a successor.

It reiterated that asset freeze on the plant by department of revenue and taxation be lifted and added that no tax liability be claimed from the successor.

The plant, which was started in 2006, made about 180 million phones at its peak, but operations were suspended and eventually shut due to a Rs 20,000-crore tax dispute. The plant was kept outside the $7.5-billion deal when Microsoft acquired Nokia Corporation.

ICA also made the case for extending duty differential rules applicable on mobile phones to the Nokia plant, which was in an SEZ, and separately advocating use of the duty differential for laptops below Rs 15,000. It added that ‘zero duty on parts, components and accessories’ should be extended to laptops under this price band, which implied zero duty in the entire supply chain system.

The Department of Electronics and Information Technology (DeitY) was studying ‘the need for extending differential duty structure to parts, components and accessories,’ it added.

The association also proposed a 10-year income tax holiday for mobile handsets, its parts, components and accessories, which are linked to fulfillment of value-added conditions, such that fresh investments in plant and machinery can be brought to the country.

“The mobile handsets’ industry segment will witness total additional investment to the tune of Rs 25,000 – 27,000 crore during 2016 to 2025, which will see total production activity in this category jumping to Rs 24 lakh crore to 25 lakh crore,” the representation explained, and added that revenue loss to exchequer will be far lower compared to ecosystem benefits and employment generated.

It has also flagged the issue of intellectual property rights (IPR) and asked the government to fix an upper cap on the overall royalty outflow, which has become the bone of contention between Standard Essential Patent (SEP) holders and Indian handset makers.

ICA has also proposed setting up a new self-regulated system, managed by DeitY for official oversight, for manufacturing of mobile handset parts, components and accessories. This will fast track clearance for multiple sub-contractors, required for the next step of mobile phone making.

Service tax on contract manufacturing and allied services like assembly, packaging, testing, designing, research and development may be exempted, the association added. Additionally, value-added tax on mobile phones and mobile phone accessories should be reduced to 4-5% from present 8-15%.

ET VIEW
Avoid Concessions, Rationalise Taxes Tax concessions for particular plants are best avoided. Instead, we need to rationalise taxes such as the minimum alternate tax (MAT) and the dividend distribution tax (DDT) and reduce the rates, including for units in SEZs.

As for maintaining the duty differential between products and components (so as to provide higher duty protection for handsets), it may well lead to spurious value-addition behind relatively high tariff walls. Hence, the need for low uniform tariffs both on products and components so as to truly incentivise globally competitive manufactures, including handsets.
Read more on
Nokia
tamil nadu
investments
ICA
services tax
Nokia’s Chennai plant

Nokia in talks with telcos for rural 4G expansion