By
Gulveen Aulakh
, ET Bureau|
Updated: Mar 31, 2017, 12.22 AM IST
0Comments
NEW DELHI: The Indian smartphone sector is expected to report a marginal sequential growth in the quarter ending March with about 30 million phones shipped. Samsung and Vivo will continue to hold on to the top two slots in a market recovering from the effects of demonetisation, it said.

Preliminary data from Counterpoint Research, exclusively available with ET, show that Apple continues to lead the premium segment of phones priced over Rs 30,000, though its lead over Samsung has shrunk.

Some market analysts expect the smartphone market to decline 4-5% quarter-on-quarter by shipments in the January-March quarter, a period that is cyclically slow. IDC and Cybermedia Research are yet to come out with their numbers for the quarter. 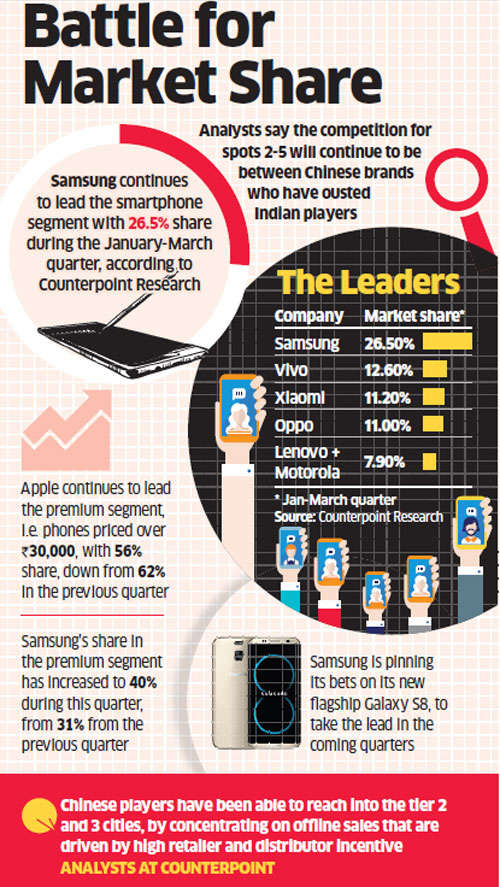 According to Counterpoint, South Korea’s Samsung continues to lead the smartphone segment with 26.5% share, while Chinese brand Vivo is at No 2 with 12.6% share. Other Chinese brands Xiaomi, Oppo and Lenovo, including Motorola, take the No. 3, 4 and 5 spots in that order, with 11.2%, 11% and 7.9% shares, respectively. Oppo has pushed Lenovo to the No. 5 position in the quarter.

“Chinese players have been able to reach into the tier-2 and 3 cities by concentrating on offline sales that are driven by high retailer and distributor incentive,” analysts at Counterpoint said, adding that retailer influence, which is more pronounced in smaller towns and cities, has worked in their favour, helping them win volume market share.

The competition for the No. 2 to No. 5 spots would continue to be between the Chinese brands that have ousted Indian players, which were severely hit by demonetisation, they said.

In the quarter ended December, smartphone sales in the country had fallen 18% sequentially to 28.9 million units, according to Counterpoint data. Sector experts said effects of the cash crunch following demonetisation have almost worn off from both sales and shipment perspectives.

In the premium segment, Apple is expected to hold on to its top position with a 56% share in the March quarter, down from 62% the quarter before, while Samsung’s share has increased to 40% from 31%. The Korean major’s hopes now rest on the Galaxy S8, launched late Wednesday night, to wrestle back top position from Apple.

Samsung is expected to launch the new model in India towards the end of April, with a possible pricing of `50,000-60,000. The S8 is crucial for the company after the debacle of Galaxy Note 7 that was globally recalled due to faulty batteries.

“It is difficult to differentiate in the smartphone space. However, Samsung has done a better job than other Android players,” Jeff Fieldhack, US-based analyst at Counterpoint Research said.

“It remains to be seen if Samsung priced itself out of competitive markets where the company has been losing share to aggressive upcomers such as Oppo and Vivo,” he said.
Read more on
Smartphones
Samsung
Lenovo
Vivo
Smartphone sales
Xiaomi
Smartphone shipment
Oppo

Xiaomi, Samsung to bring parity to online and offline launches