Reliance Jio, too, wrote to Trai on Thursday, to rebut Airtel’s assertions that it was exaggerating and distorting facts to get the IUC abolished.

By
Devina Sengupta
,
Gulveen Aulakh
, ET Bureau|
Sep 15, 2017, 01.14 AM IST
0Comments
MUMBAI | NEW DELHI: Idea Cellular has suggested two methods to the telecom regulator to determine the interconnect usage charge (IUC), a bone of contention between new entrant Reliance Jio and market leader Bharti Airtel that has resulted in an acrimonious war of words between the two.

In a letter to the Telecom Regulatory Authority of India (Trai) on Thursday, Idea Cellular CEO Himanshu Kapania said the regulator can either have two sets of interconnect usage charges (IUC) — one for 2G, 3G and 4G non-VoLTE services and another for 4G VoLTE, or take the weighted average of VoLTE and non-VoLTE minutes on a network to calculate the fee.

“Both the solutions overcome legal infirmities, meet requirements of fairness and comprehensively reflect the market dynamism the consultation process is seeking to address,” Kapania said. Any move to lower the IUC would benefit only Jio and hurt rural coverage, he said. IUC is a fee a mobile service provider pays another to link a call to the latter's network. It is currently at 14 paise per minute, which Jio wants scrapped, but incumbents, including Idea, want doubled to cover their carriage costs. Trai has said it will decide on the IUC shortly.

Kapania said that should regulation seek to “glide” towards one technology, which in an avowedly technology-neutral policy environment is impermissible, at the very least, it cannot use the IUC rates to engineer such “glides.” “To do so would be an added admission of regulation-driven cross-subsidy between competitors… That would be destructive of competition and would violate primary mandate of Trai regulation,” he said in the letter to Trai chairman RS Sharma, opposing a bill and keep (BAK) regime. Less than 5% of Idea’s voice traffic terminates on VoLTE-based 4G network; the rest are to 2G, 3G, 4G non-VoLTE-based networks.

According to sources in the firm, the company has lost Rs 500 crore between 2012 and 2016 due to low termination charges. “A stable and a predictable IUC regime is critical to retain the key national asset, sustain competition and attract fresh investments needed to connect the unconnected and transform India into a digital society,” Kapania said. The formula based on weighted average had the advantage of simplicity and ease of administration, besides being appropriate for the next three to four years, he said. 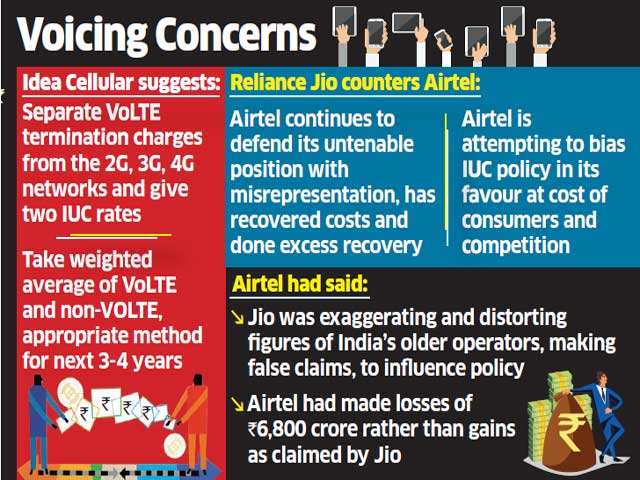 Reliance Jio, too, wrote to Trai on Thursday, to rebut Airtel’s assertions that it was exaggerating and distorting facts to get the IUC abolished. Airtel's allegations were “spurious, biased in nature and purposefully misleading,” Jio said, and sought a shift to the BAK system in which IUC is absent.

On Wednesday, Airtel had again accused Jio of exaggerating and distorting the figures of India’s older telecom operators and making false claims to mislead authorities and public at large to turn the policy in its favour. It was responding to Jio's earlier accusation that Airtel had created a smokescreen to hide its “ill-gotten profits and to support its false pretence of loss — of around .`6,800 crore — under the existing IUC regime.”

Jio, on the other hand, said that incumbents had recovered their costs of carriage many times over, while smaller operators have suffered by giving excessive payouts, which have led to financial stress for them. It reiterated its demand for a BAK regime. It told the regulator that Airtel wants to understate true recovery under the pretence of reclaiming IUC payout, and, therefore, its contention against Jio’s analysis on IUC payouts does not hold water.

“We are appalled by the irresponsible and unscrupulous behaviour by an established service provider like Airtel, where it continues to defend its untenable position with misrepresentation… we submit that all the assertions of Airtel are spurious, not based on true facts, biased in nature, purposefully misleading and should be summarily dismissed by the authority,” Jio’s letter to the Trai chairman said. “We submit that the only attempt of Airtel is to bias the policy on IUC in its favour at the cost of consumers and competition,” it said. The Sunil Mittal-owned Airtel had on September 11 rebutted the claims made Jio had made in a September 6 letter to Trai, saying that rather than gaining from IUC, the company had suffered losses of Rs 6,800 crore in the last five years.
Read more on
Idea Cellular
Reliance Jio
telecom regulator
IUC
interconnect usage charge
Bharti Airtel

No proposal before TRAI to amend interconnection usage charges

Interconnect Usage Charge: Facts that you should know

TRAI may phase out the controversial interconnect usage charge