‘Secret’, an application for anonymous confessions and gossip, is slowly gaining ground as the social tool of choice in the Indian entrepreneurial community.

By
Madhav Chanchani
, ET Bureau|
Updated: Sep 02, 2014, 05.44 AM IST
0Comments
MUMBAI: Feedback may be the breakfast of champions, but startups in the country are finding it difficult to find the timely, constructive and straightforward variety they need to course correct and succeed.

Which is why ‘Secret’, an application for anonymous confessions and gossip, is slowly gaining ground as the social tool of choice in the Indian entrepreneurial community.

The application allows startup founders and senior managers to get some honest feedback and, in some cases, clear misconceptions about their ventures.

‘Secret’ is the Darling of India’s Silicon Valley

Like Harish Sivaramakrishnan of mobile recharge startup Freecharge did last week. The 33-year-old chose to identify himself — users remain anonymous — and answered a series of queries on hiring, work culture at Freecharge, his rock band, and feedback on Freecharge’s application, among other things.

“I think Secret is a great channel to get feedback more honestly,” said Sivaramakrishnan, the vice-president responsible for front-end engineering and user interface at Freecharge.

Others agree. “It exposes what people really think,” said Kiran Jonnalagadda, founder of HasGeek, a fouryear-old startup that creates events for software developers. “The grapevine includes everyone except the offended party. With Secret, you know what people are saying about you and understand if you are doing something wrong.”

Jonnalagadda initiated a discussion on Secret, where he learnt that people assumed speaker slots at Has-Geek events are paid. Has-Geek said it will now make the speaker selection process more transparent. “Another feedback was that women should have different cut Tshirts and not the same as men,” said Jonnalagadda.

San Francisco-based Secret, founded in 2013 by Chrys Bader-Wechseler and David Byttow, has emerged as one of the hottest startups in Silicon Valley. Based on your telephone address book or Facebook friend list, the app tells you if an item was posted by a friend or friend of a friend or is available to see just because it became popular.

The firm has raised over $35 million (Rs 211 crore) in venture capital from VCs such as Redpoint Ventures, Index Venture and SV Angel. While its exact user base could not be determined, the app has seen millions of downloads on both Android and Apple app stores. The application has also faced criticism recently after it was used by certain teenagers to bully others. 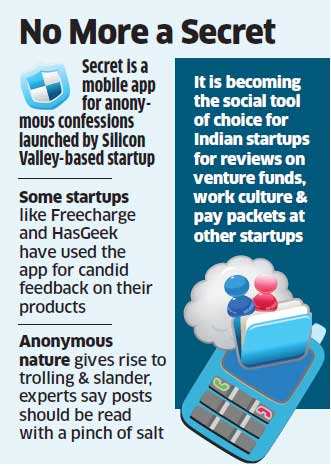 Even though gossip remains Secret’s mainstay, users discuss topics that cannot be done elsewhere. One conversation thread talked about product managers’ salaries at e-tailer Flipkart or mobile advertising firm InMobi, two of India’s biggest startups. Another centred on how to deal with a co-founder who was not contributing anymore. Given that startups are using the application, funding is one of the most discussed topics now.

There are discussion threads on major venture capital firms in India, with topics ranging from which funds are founder-friendly to which ones offer the best operational advice. But with several VCs rejecting most ideas pitched to them, many discussions become forums for venting anger. Mahesh Murthy, co-founder of VC firm Seedfund, said increasing engagement among the startup community through apps like Secret is good. “I believe you should always take any anonymous opinion with a large pinch of salt. One should take it more as an outlet for expression than a place for real and credible news and feedback.”

He cautioned that some use such forums for spreading lies about well-known entrepreneurs. But Secret's success is not surprising in a country like India which has become one of the biggest user bases for social applications such as Facebook and Twitter. India has become the fastest-growing market for mobile messaging app WhatsApp with 65 million users. Quora, the user generated question-andanswer website, said earlier this year that 40% of its users are from India.
Read more on
San Francisco
Facebook
android
Twitter
silicon valley
inMobi
Surrender value
Scenario Analysis
David Byttow
Comments
Add Your Comments
Commenting feature is disabled in your country/region.